Talking In the Treble Clef 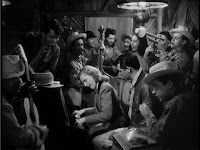 Lines cast out by my I-pod shuffle:

Look at this town--there's no men left!/Just frail old boys and babies/Talking to teacher in the treble clef (Joni Mitchell and Herbie Hancock, "The Tea Leaf Prophecy")

How might we reel these lines in? They caught my ear because they presented various forms of lyrical opacity, that "wha--?" of first hearing that might also inspire laughter, head-scratching and curiosity. Upon reflection, we might tease out what the words mean, place them in a logical context ("Baby, act like you know"): this one's an historical memory, that one's a pickup line, etc. But such a reading, however "correct," isn't really that interesting. The lyrics here aren't functioning like those in a musical or an opera, where they contribute to some kind of longer narrative or overarching character development. Instead, they're pop songs that function like snapshots, moments cut out of the timelines of the characters they delineate, offering the offbeat aside. Instead of seeing them as the basis of an exigesis, how might we capture their wit and energy and often cinephiliac imagination, and deploy all that as a motor of creativity?

Notes for a future assignment:

Take three lyrics from three different pop songs that fascinate or confuse you: the more lyrically opaque the better. Write a brief narrative (one to three paragraphs) based on each. This narrative can have a direct connection with the lyrics (if the line discusses a character or setting or event, for instance, that you want to tease out), but should not simply reproduce any narrative that the song as a whole creates: for instance, if you're fascinated by a line in "Rocket Man," don't just retell that song's already-existing story. Instead, it should be a new fiction you've generated out of those elements. The story you generate doesn't have to have any direct connection to the lyric, however: it can also be inspired by the tone the words create, or the image that flashes up in your head as you hear them, an image which might be quite different from the one the line directly describes.

Once you've written your three brief stories, tie each of them to a film watched in class. That connection can be (perhaps should be) an offbeat one, and not simply a one-to-one relationship. Use the stories and the lyric as a bridge into the film's formal elements, the class reading, etc. What does entering a critical discussion on a film in this manner add to your understanding of it?
Labels: Let's Play A Game movies Pedagogy Pop Music