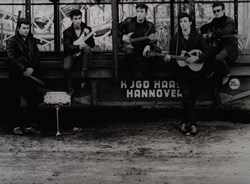 In one striking image (sadly unavailable online) from the Experience Music Project's Artist To Icon exhibition, a bunch of Liverpool teens have gathered for a large group photo in the street, commemorating the July 10, 1964 "Beatles Day" in the band's hometown. It was the first time the Fab Four had been back to the port city since they'd made it big, and the day served a dual purpose as a hero's return/thank you to their longstanding fans, and a keen marketing opportunity for the just-opened A Hard Day's Night. What's most striking about the photo, however, is how eerily it predicts the album cover of Sgt. Pepper: dozens of smiling, almost beatific teens stand with guitars, tubas, trombones and other musical instruments, grouped together in rows and all decked out in similar, Beatles-style regalia. The band itself appears nowhere in the photo, but the picture speaks to the symbiotic relationship they had with their times, their ability to both shape and reflect the oncoming teen onslaught.

The rest of the exhibition is a similar revelation about the public and private sides of three pop icons: The Beatles, Bob Dylan, and Elvis Presley. Some of the photos (like the one above) are famous, some are private (I especially like the image of a smiling, Joker-like Dylan backstage) and some offer performance stills I'd never seen before, like one of Dylan sharing a spotlight with Joan Baez, the light bending and refracting off them both, as if their charisma was powerful enough to literally shape a space. If the exhibit (which I caught this past weekend at the Kalamazoo Valley Museum) comes anywhere near you, I highly recommend it.
Labels: Michigan Photography Pop Music The Beatles Travel