Disciplined But Not Economical 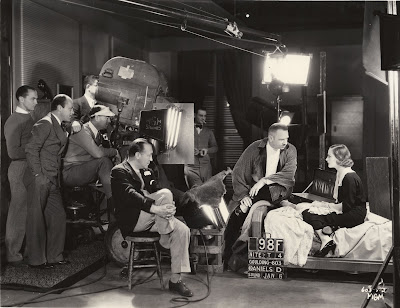 I spent part of last night re-reading Thomas Schatz's The Genius Of The System, a lovely book that I used a lot in graduate school but hadn't looked at in a couple of years. Almost on a whim, I grabbed it off my office shelf late Friday afternoon and took it home, and aside from curiosity, I can't really tell you why. I am teaching Grand Hotel in a few weeks, and I suppose subconsciously I might have thought it'd be useful to re-read Schatz's very helpful anecdotes about the making of that film; I've been thinking a lot about F. Scott Fitzgerald lately, and it's from Fitzgerald's The Love of the Last Tycoon that Schatz pulls his key quote on the "whole equation of pictures" that the studio system solved in the 1930s; and it's always nice to go back to an academic book that's so well-written, at once dense in historical detail and a breezy pleasure to read.

"Breezy pleasure" might be the key here-- I can offer pragmatic or pedagogical reasons for snagging the book the other day, but none of those holds the whole equation of my desire. There's no logical reason, in other words, for my gesture; there's only a logic of pleasure, a cinephiliac need to re-enter a text I already knew. I did so not to solve a problem, but just because. It was the sections on Irving Thalberg that I was most drawn to in re-reading, and one phrase describing his working methods particularly jumped out at me: Schatz calls MGM's methodology in the early 1930s "a logic of excess, a calculated extravagance":

In fact, by the early 1930s, Thalberg's system was in many ways less efficient and systematic than any other studio's. But Thalberg was convinced his strategy would pay off in the long run-- quite literally, in terms of long-running releases--so long as he controlled the entire process.

This is a well-known reading of Thalberg and MGM in the 1930s, and yet its implications still feel untapped. What is a "logic of excess"? What does it look like? In cinematic terms, it looks like the still above, from Grand Hotel, that balance of art and capital, narrative economy and visual glamour that made up the two halves of Fitzgerald's metaphoric math problem. But beyond cinema, as a working method for cinema studies-- a space that often prides itself on its social realist minimalism-- what might it mean to craft a "logic of excess," to find in that paradox not a riddle to be scorned, but an engine of creativity?
Labels: Blogging Fitzgerald movies Pedagogy Theory Writing

Anonymous said…
Very much enjoyed this. This situation happened to me recently in preparing for class--I went back and reread Andrew Sarris's "Towards a Theory of Film History." Whatever you think of Sarris and auteurism, it's a beautifully written piece (it served as the intro to his American Directors book), and it's far from the dogmatism Sarris is often wrongly associated with. The piece isn't perfect by any means--the reference to a "lady critic" (Kael, I'm assuming) seems dated, if not outright misogynist--but his thoughts on cinema are still compelling.
February 16, 2009 at 8:47 AM

Brian Doan said…
Dave,
Glad you enjoyed the post! It's been awhile since I've read that Sarris piece, but I use "Notes on the Auteur Theory" a lot, and I think he's a very graceful and insightful writer-- the AMERICAN CINEMA book is a wonderful text to get caught up in and argue with (he also has a nice book on sound cinema between 1930 and 1960 that came out about ten years ago. It's a very cinephiliac collection of essays and remembrances, and there's a lovely section on his father's obsession with LOST HORIZON.
February 16, 2009 at 9:38 PM

Anonymous said…
I'll have to check out that article. And what I like about the piece I mentioned, in reference to your comment on the book being a good one to "argue with," is that he's explicit about his desire to provoke just that--debate, discussion, and further consideration of cinema. He really wants to create a dialogue with his reader, and there's an openness there that his worst critics don't often give him credit for.
February 17, 2009 at 8:19 AM