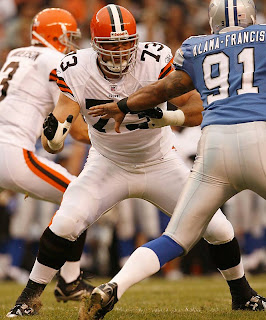 So, all Joe Thomas has done since he came to Cleveland in 2007 is play hard, make the Pro Bowl two years in a row, work through injuries, and anchor a resurgent offensive line, something the Browns hadn't had in a decade. To say nothing of his charitable work in the community, his quiet demeanor, and the humble way he represents himself on and off the field. And what does he get in return?

An anonymous, passive-aggressive, debatable slam in his local paper.

There's nothing wrong with Adrian Peterson-- he's a spectacular player, and the Vikings are lucky to have him. But I really question the point of this article, which gives space to the venting of an ex-employee, two years after the fact, who doesn't even have the character to go on the record with his bitterness.

But I guess if the Plain Dealer wants to be the sports equivalent of Politico, that's its business. You stay classy, Mary Kay Cabot!
Labels: Cleveland football Media Plain Dealer Random Oddness Sports