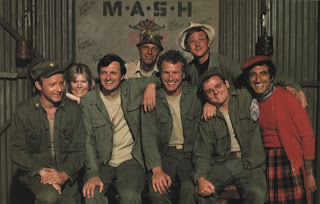 Larry Gelbart, the writer and producer who adapted M*A*S*H for television, and guided it through its first four, funniest seasons, died from cancer Friday at the age of 81.

In addition to his work on M*A*S*H-- and pause for a moment to think about how successful a career you had to have had in order to "add on" to something as important as that show--Gelbart also co-wrote the Oscar-nominated screenplay for Tootsie, was co-librettist on Stephen Sondheim's first musical, A Funny Thing Happened On The Way To The Forum, and was part of a celebrated writing staff for Sid Caesar's Your Show of Shows that included Neil Simon and Carl Reiner (Gelbart would later collaborate with the latter on the George Burns comedy, Oh, God).

But it's probably M*A*S*H for which he will be best-remembered. Gelbart had the unenviable task of translating to TV a film that was not only a huge commercial success, but a politically sharp cult favorite. The dark humor and innovative visual style of Ring Lardner, Jr.'s script and Robert Altman's direction were not qualities seen in a lot American television comedy up to 1972 (All In the Family probably comes the closest, but its deliberately flat, video-taped mise-en-scene didn't go in for Altmanian zooms, cuts and overlapping voices). In the wrong hands, M*A*S*H could've been a disaster, but somehow, Gelbart and his writing staff found a way to maintain the visual style within the small, then-square confines of a TV screen, and more importantly, transformed the movie's voice while subtly altering it. They kept the gonzo humor of the movie, and its cynical view on war, politics and the military, but also recognized that the go-for-broke cruelty (if cruelty with a point) that the movie used to its advantage in a two-hour space simply couldn't sustain itself over the course of a multi-season show. The characters would have to develop, and become more three-dimensional.

To that end, they cast actors with remarkable range (and gave them a degree of freedom in the collaboration-- encouraging them to write and direct as well as toss around story ideas-- that wasn't always common in the 1970s), filled in characters' backstories, and let the surrealism of certain images or narrative threads-- such as Klinger's desperate attempts at cross-dressing himself out of the military-- stand in for more extended speechifying. They also solicited stories and technical advice from doctors and nurses who served in Korea, and many M*A*S*H writers have said that what wound up on screen was often a toned-down version of some of the tales they were told (in this regard, I always think of my grandfather, whose politics were very much to the right of the program, but who loved it, anyway. He had served as a surgeon in a M*A*S*H unit in Korea, and while he never said this, I sometimes wonder if he saw a bit of his own experience, however exaggerated, in the hi-jinks on the screen).

Most importantly, they refused to reduce the characters to either heroes or villains, making them neither perfect nor evil. Hawkeye was at once a witty conscience and a sexist jerk, a talented surgeon and a self-righteous, alcoholic egotist. Margaret was a stuck-up scold, but also a dedicated nurse. Henry was an absent-minded goofball, but also a fierce defender of the men and women under his command. That blend of genres and self-aware roundedness of character is a legacy that lives on in shows as diverse as Gilmore Girls, Hill Street Blues, The West Wing (Sorkin has always cited M*A*S*H as a big influence) The Office, and Buffy The Vampire Slayer. That dash of humanism-- crucially balanced by the slapstick, anarchic spirit Gelbart learned under Caesar-- was the secret of M*A*S*H's success, and the balancing act seemed to mostly be Gelbart's: when he left, the show slowly slid into a more cloyingly sincere moralism, as the characters became more and more "likable" until there was no conflict left in them off which to spark drama. The later years of M*A*S*H are certainly enjoyable, but they never again captured the mix that Gelbart helped facilitate.

Like I said above, it was a long and spectacular career, and I haven't even said much about his Tony-winning musical, City of Angels, or Tootsie, a film I adore. But Bob Westal covers that film beautifully in his piece at "Forward To Yesterday," and TV writer Ken Levine-- who worked with Gelbart on M*A*S*H-- has posted several times about his friend and mentor. Meanwhile, it seems appropriate to let Gelbart himself have the last word:

Craig said…
Thanks for a nice write-up on an influential person. In addition to the credits you mention, I really enjoy Gelbart's "Barbarians at the Gate," superbly funny and in some ways ahead of its time in terms of its jaundiced eye on the tobacco industry, Wall Street hooliganism, and the use of spin to control The Message.
September 13, 2009 at 8:11 AM

Brian Doan said…
Thanks, Craig! I really like BARBARIANS, too, and regret forgetting it when I was writing the post. I think Gelbart's writing for that film is very sharp, and it gives James Garner one of his great, late-career showcases.
September 13, 2009 at 6:49 PM

CZR said…
Excellent write-up, Brian. I was very saddened to learn about Gelbart's death over the weekend. He lived a long, full life but it's still a great loss for us. I grew up on the underrated Mastergate, which used to play in heavy rotation on Showtime back in the early 90s.
September 14, 2009 at 8:38 AM

Brian Doan said…
Hi Zayne,
Thanks! Glad you enjoyed the post. I read about Mastergate in one of Gelbart's obituaries, and it sounds really interesting, but I haven't seen it. Do you know if it's available on any format?
September 14, 2009 at 9:33 AM

Alex said…
What a sad loss. We've created an online tribute page so fans can leave lasting memorials http://www.lastingtribute.co.uk/tribute/gelbart/3148563
September 14, 2009 at 9:38 AM