Change We Can Believe In

No, not that, but this and this. 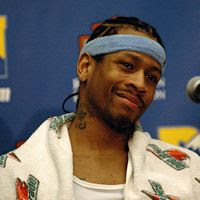 One of the advantages of traveling Sunday was that I missed the Browns-Ravens game. But talking with my father, a committed Browns fan, and reading this piece makes me believe it was good I didn't see it. I can't disagree with anything Don Banks writes here: the Browns have given Derek Anderson countless opportunities this season, and it's long since time to see what Brady Quinn can offer. Some combination of loyalty, stubbornness, resentment (Quinn held out during last year's pre-season) and ego (Savage discovered Anderson when he worked for the Ravens) kept Browns management from pulling Anderson this season (or better yet, trading him after last year, when his value was at a peak it will never again reach). But now the team can finally look ahead to the future. At worst, you get Quinn off the bench, see what you have, and perhaps create some trade interest among other teams; at best, you have an inexpensive quarterback of the future. I don't think Quinn can lead the team to the playoffs, and he might not even get them to a winning record this year, but he'll give them energy, imagination and leadership on the field: three things Anderson has sorely lacked.

I'm not sure what to say about Iverson-- I'm still kind of in shock they have him. He's the first legitimate superstar the Pistons have had in fifteen years, and even if he's at the tail end of his talent, I've always loved his on-the-court game (his off-the-court behavior is a mixed bag). I suspect Detroit fans will respond positively to his scrappiness, skill and colorful imagination (furthermore, as Ian Thomson points out, there's the chance that the Pistons could get McDyess back, giving them even more depth). If he can give an already talented team even half of what he had in Philadelphia and Denver, it could be a good spring in Detroit.
Labels: Cleveland Election '08 football Michigan Obama Politics Sports