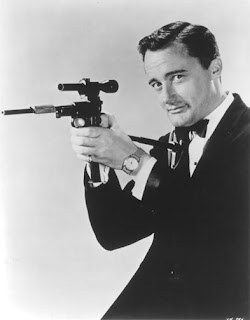 Happy birthday to Robert Vaughn, best known for his four seasons playing super-spy Napoleon Solo on The Man From U.N.C.L.E. in the 1960s. David McCullum's dry wit and moody pout made him the fan favorite on the show, but it's hard to imagine the whole tongue-in-cheek enterprise holding together without Vaughn's charm, and playful mix of hammy self-regard and knowing self-deprecation. Born in New York in 1932, he grew up in Minnesota, while spending the summers with his mother and step-father in Manhattan (where they were both theater actors). According to his just-published autobiography, A Fortunate Life, Vaughn was bit by the acting bug early, performing at the age of six for the great John Barrymore in a Chicago bar, and forcing classmates to listen to him perform Shakespearean monologues in grade school. This early training would eventually pay off when he went to Los Angeles City College in the late 50s and did an acclaimed performance as Hamlet that helped accelerate his career (he also met lifelong friend James Coburn at the school). He received an Oscar nomination for Best Supporting Actor (opposite Paul Newman) in The Young Philadelphians, and gained further notice in The Magnificent Seven as the nervous gunfighter Lee. Following the cancellation of U.N.C.L.E. in 1968, he would give his most interesting big-screen performance as the oily politician Chalmers in Bullitt, and win an Emmy for Washington: Behind Closed Doors in 1977, a series he says was one of his favorite projects. Most recently, he's played the rakish con man Albert on the BBC hit Hustle, which is currently filming its fifth season.

But it's not only as an actor that Vaughn made his mark. He was an outspoken critic of the Vietnam War, chairing the organization Dissenting Democrats and debating William F. Buckley, Jr. on Firing Line in 1967. His speeches and other political work threw him into conflict with Lyndon Johnson (in his autobiography, Vaughn has a priceless anecdote about meeting LBJ, who stood "in a ten-gallon hat, looking closer to seven-feet tall," and spun the actor close to him, saying, "Oh, yesss. You're the speech maker!" When Vaughn nodded affirmatively, Johnson said, "Well, good luck, son!" and "then he flung me away into the crowd like a dishrag"). They also initiated a close friendship with Robert Kennedy, whose Hickory Hill house Vaughn would visit several times before the politician's death.

Most intriguingly, Vaughn has a Ph.D. in communications, which he worked on all through the run of The Man From U.N.C.L.E. (talk about multi-tasking!). It was about the Hollywood blacklist, and was published in the early 70s as Only Victims. I have not read it, but Vaughn's rich and relaxed writing in A Fortunate Life makes me curious to.

Finally, I would be remiss, amidst all this praise, if I didn't mention the oddest recent spotting of Robert Vaughn-- on the back of a Laffayette, Lousiana phonebook. When I was down there with The Babe and her family this past summer, there was the stern, thumb-pointing image of Napoleon Solo staring back up at me, and shilling for a local lawyer named William Gee. Apparently, Vaughn has done a number of these kinds of ads for lawyers across the United States.

So, on this cold November night, open Channel D and kick back with an episode of U.N.C.L.E. in celebration. The entire four-season run was just released in a gargantuan-yet-stylish box set that's full of extras (five whole discs worth!) and fantastically remastered eps. It may not have the surreal panache of The Avengers or the existential cool of I Spy, but U.N.C.L.E. more than makes up for it with high production values, jack-in-the-box twists and the arch banter of its two leads. Many aspects of the show have dated (which is not a bad thing), but the cool of McCullum and Vaughn remains intact-- in their contrasting styles, they turn espionage into a metacommentary on acting, and they transform both into a dandyish lark.
Labels: Kennedys Politics Robert Vaughn Spies The Man From U.N.C.L.E. TV You Say It's Your Birthday