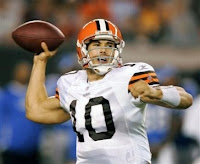 The Browns game was on NFL Network last night, so I was unable to watch Brady Quinn's debut. Instead, I followed it on SI.com's "Live Viewcast" page, which gives play by play updates on the game and changing scores; the effect was what I imagine it was like to hear baseball scores read to you via telegraph wire in the 1920s (somehow, this archaic form of communication seems appropriate for following the Brownies). After the game ended, it occurred to me that I probably could've tuned it in on the local radio, but this is what having a persistent head cold does to your memory...

Anyway, they lost to the Broncos 34-30, but Quinn's line (23/35, two touchdowns, no interceptions) isn't bad, and it's certainly a better stat sheet than Derek Anderson's been putting up lately. I'll take it for a debut, even though I wish we could've beaten the hated Broncos. There's more on the game here.
Labels: Cleveland football Media Sports