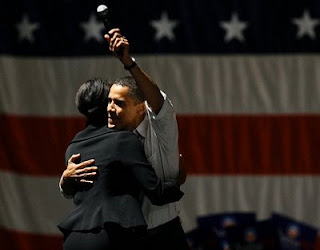 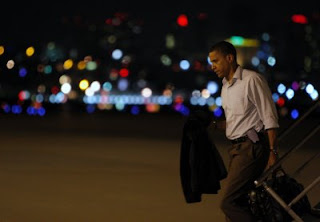 When MSNBC called it, and showed the graphic of President-elect Obama, I'll admit-- I almost lost it. After 11 crazy months of watching, worrying, blogging, arguing, hyperventilating, blogging some more, and then voting...it was over. And he won! For the first time in eight years, my guy won! The state I voted in went for Obama, and so did Florida, my old home and the site of so much prior electoral heartache. I spent the day in a state of high anxiety, trying to relax by reading, watching movies, scanning the web, browsing in bookstores. I didn't teach today, thank god, and I knew I wouldn't be able to concentrate on any work. I've been under the weather for a week, anyway, which contributed to the tension, but I think I just felt overwhelmed all day, thinking of everything that could go wrong. He couldn't really lose, could he? After all this? America isn't that stupid, is it? About an hour ago, I still felt overwhelmed, but it was a far different feeling, and one I don't want to let go of.

I won't lie-- part of the overwhelming feeling is because Obama is black, and the huge emotional, poltical, symbolic resonance that has. Speaking to the Babe this evening on the phone (we immediately called each other when the results were announced, and crossed our cell wires just as I was leaving her a message), we both said that we didn't know if such a thing would happen in our lives (and if it did, I thought I would be much, much older). But it's not just his race-- it's who he is. Whatever happens over the next eight years, I don't know that I will ever be more excited by a Presidential candidate-- his intelligence, his cool, his calm, his poetic gifts and that brilliant audacity of hope. Nihilism is easy; cynicism is easy; hope is hard, but essential. Obama's great gift was to convince millions of voters to give up their hipster pose, to risk failure and heartache and believe again. Watching the crowds in Grant Park (hell, more locally, hearing the fireworks going off down the street in celebration), what I see is not just excitement at a win, but delirium at the possibility of a real future, a real community, a real America. 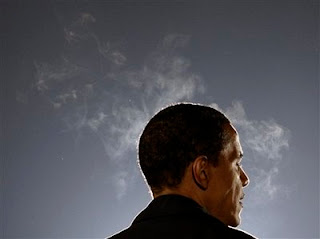 Across the country in Arizona, in front of a different crowd (one so full of red flags that it almost looked like a Soviet rally), John McCain gave a gracious concession speech. It was more notable for its delivery than its words, his obvious disappointment and sadness giving us glimpses of his humanity that we didn't really see during the campaign. Framed by the odious Sarah Palin (whose eyes already danced with visions of 2012 as she scanned the crowds), he spoke of unity, honor, friendship and bipartisanship. Those are important values, but what was surreal was how disconnected the high-flown rhetoric felt when juxtaposed with the campaign McCain just ran, one of the sleaziest in recent history; it was like a speech from Bizarro World, where McCain is still an honorable maverick, and he and Obama just held the equivalent of the Lincoln-Douglas debates. Very strange, but I'm willing to give him the benefit of the doubt, and hope he really will work with Obama to make the country better (trust but verify, you know?).

But those are problems for another day, remnants of an American past. Obama's walking out on stage as I type this, about to carry us into our future. Or are we carrying him? In the end, the race was not just about Obama or McCain, but about what we can achieve together, if we are willing to make the leap. No recent campaign has used media so well, and none of Obama's ads summarized his appeal, and this historic campaign, as well as this one:

As Andrew Sullivan keeps saying, know hope. The future is yours, if you want it.