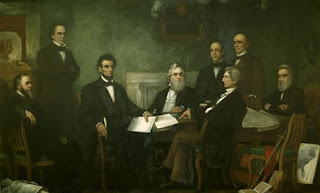 So, by now, you've probably heard the rumors about Hillary Clinton being on (ooh, I never get tired of saying and typing this) President-elect Obama's short list list for Secretary of State. Which, for me, begs just one question: Why?

I know, I know, nothing's confirmed, and my personal favorite for the post, Bill Richardson, is still in the running (and to me, really, he's a no-brainer), but since Clinton hasn't denied the rumor, I'll take that as an opportunity to speculate. I have no doubt that Clinton, a gifted policy wonk, would make an excellent Cabinet secretary for Obama (or, as some have speculated, an even-better Supreme Court nominee). ABC News said last night that Obama is influenced by the "Team of Rivals" theory Doris Kearns Goodwin put forth in her recent book on Lincoln's Cabinet (I haven't read it, but it's on my history book list as soon as I finish the new FDR biography, Traitor To His Class, which I commend to your attention). This speaks well of both Obama's political smarts and his desire to reach out to rivals and political enemies. Sure, definitely put Senator Clinton in the Cabinet. But...Secretary of State? Really? Why?

Can anyone think of an example of Hillary Clinton's vast foreign policy experience? Does her "yea" vote on the Iraq war speak to her visionary viewpoint on America's role in the world? Obama has an extraordinary amount of goodwill coming his way-- has had it since he clinched the nomination this summer, so the idea that she somehow shores up his international image with her reputation (the theory I just heard floated on CNN) doesn't make sense to me. Nearly everything I can think of that Clinton is good at, knowledgeable at-- health care, child welfare policy, economic populism-- are domestic policy issues. Department of Labor, Attorney General, Health and Human Services-- I could imagine Clinton in any of these roles. But even if you want to make the argument that the boundaries between domestic and foreign policy are more and more dissolved in an interconnected world, I still don't understand the upside to naming her to this position when there are many other Dems who could fill that important post with far more panache and experience.

Obama's cool and patience have constantly surprised me and proved me wrong over the last year, so I'll keep the faith that he knows what he's doing. But still-- why?
Labels: Election '08 Hillary Clinton Obama Politics