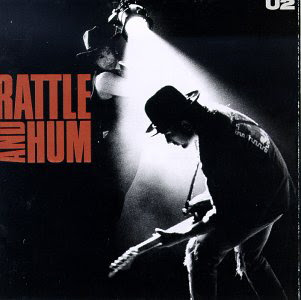 Twice in the last five days-- once in a comics shop and once in a cafe--I've heard the soundtrack to U2's Rattle and Hum playing over the speakers. This, as Buffy might say, is not to the bad: much maligned upon initial release 20 years ago, the album has aged very well, both tying up some loose, roots-rock ends ("Van Diemen's Land," "When Love Comes To Town," the various live versions of past hits) and pointing to the sonically and emotionally darker territory ("All I Want Is You," "Desire," "God Part II") that the band would mine to even greater effect on their 1991 masterpiece Achtung Baby. Above all, there is the Billie Holiday tribute, "Angel of Harlem": it sounds nothing like Billie Holiday, and manages to get some dates wrong in the lyrics (while "Birdland of '53" might indeed have sounded "like a symphony," there certainly wouldn't have been "John Coltrane and Love Supreme" lying around, as that record wasn't released until '64), but its Stax horns and open-throated vocal make it the most joyous and groove-heavy of all U2's hits.

So, Rattle and Hum, definitely good. But twice in five days? If I hear it once more this weekend, I'll start to suspect a Bono-driven conspiracy...
Labels: Billie Holiday Buffy Jazz Pop Music Random Oddness Surrealism U2