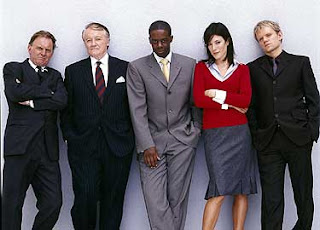 As winter storms whip through Cineville, it seems like a good time to settle in with some good, warm televisual comfort food, and Hustle fits the bill. This British import, which I've been watching through Netflix, is not going to challenge Buffy, Friday Night Lights or The Sopranos as appointment television, but it does offer some old-fashioned charms: funny characters, smooth acting, and twisty caper narratives that, despite their hip, Ocean's Eleven/Snatch-like surface glitz (enhanced by the club-derived scoring), really harken back to an earlier model of mystery narrative, that of late-sixties and early-seventies programs like It Takes a Thief and Mission: Impossible, or films like The Thomas Crown Affair, where the pleasure is not in where the narrative goes, but the stylish ways it gets there. The casting of Man from U.N.C.L.E. Robert Vaughn (as the eminence grise of a team of Robin Hood-style grifters) enhances this old school vibe, and he's ably supported by a charming cast that includes Dexter supporting player Jaime Murray and British stage star Adrian Lester. Most episodes follow a formula-- find the mark (generally some obnoxious business tycoon or public institution that the audience can have no sympathy for), plan the con, watch it fall into place then almost fall apart, cue the twist that pulls it back together (while also kicking off flashbacks that fill in the missing pieces of cleverness for the audience). Not every episode conforms to this pattern and, indeed, some of the pleasures as the show unfolds are the jazzy variations to the template that the producers occasionally introduce. Still, its overall insistence on a clockwork structure acts as a nice metacommentary on the nature of the con, and the expectations of television narrative overall: do we want change or repetition, the comfort of the old or the shock of the new? Or does the grifter teach us that each shares the same narrative sleight-of-hand, the ability to make us think there's both more and less there than meets the eye?
Labels: Hustle Spies TV Writing