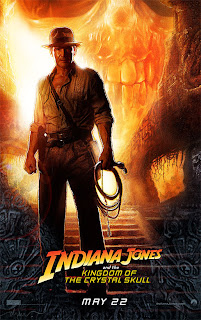 Poster alert! The most accurate cinematic portrayal of an academic ever makes his big-screen return on May 22, in Indiana Jones and the Kingdom of the Crystal Skull (say that title three times fast-- a little wordy, ain't it? I imagine Lucas had it lying around as an Episode III alternate title). You can read about the new film (and get some non-spoilery plot details) here. I, for one, am geeked-- despite the deflated tone of Last Crusade (where Spielberg and Lucas almost seemed apologetic about the thrills they were providing), the Indy movies are still among the most enjoyable action epics in recent memory, and the superb supporting cast and acknowledgement of Harrison Ford's age in the narrative are good signs.

Even if the movie stinks, though, it's worth it just to have another of those iconic teaser posters the series is so good at. And Ford looks quite good for a painted 65-year-old.
Labels: blockbusters General Geekery George Lucas Indiana Jones movies Star Wars Steven Spielberg