Thanks A Lot, West Virginia 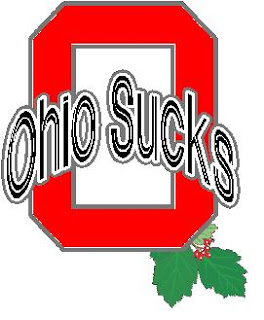 Being a fan of Cleveland sports is a masochistic enterprise, not only because your teams inevitably let you down, but because the coverage has a distinctly Charlie Brown feel-- no win is so great that the local sports media can't find something to whine or worry about. That's true of a lot of places, of course (I mean, I grew up following the Detroit Lions, too, so this is hardly new), but it takes on a special pathos in Cleveland, a city that ranks only behind Boston in its clinging to a matyred sports image.

The exception to all this garment-renting is that team down south.

After moving to the fair state of Ohio last year, I realized the state has three professional football teams-- the Browns, the Bungles, and the Buckeyes. And of the three, it is OSU who gets the fair-haired treatment from our (relatively) local paper, the Plain Dealer. The PD likes to posture as northern Ohio's Around The Horn, i.e., the "tough-talking" group of reporters and columinsts who will give it to you straight, critique the locals, take no prisoners.

Except when it comes to the Nuts.

No matter how OSU stinks it up on the field, or off, there is always an excuse, always a reason, always a justification. Perhaps it's because Ohio has no other major in-state rival, the way Michigan has Michigan State, or Florida has FSU, so everyone rallies around them. Perhaps it's because for many, Jim Tressel's tight-lipped, sweater-clad image sets off oedipal reminders of Woody Hayes and all the other daddy figures that the boomer press cling to so tenaciously. Maybe, frankly, it's simply because OSU is often Ohio's only winning football team (although my Yeoman were 5-5 this year, baby!). The Buckeyes are Ohio's version of The Manchurian Candidate-- you almost get the sense the PD's columnists were brainwashed to say that Jim Tressel was "the kindest, bravest, warmest, most wonderful human being I've ever known in my life" (Actually, looking up the quote on IMDb, I found another which seems to prove my point, from Sinatra's Bennett Marco: " I guess so, Columbus is a tremendous football town").

Because of this sickening sycophantism, I was hoping we'd be spared OSU in the title game, but alas, it's not to be. Thanks for the great season, Browns, and all the good publicity, Le Bron James, and the near-championship season, Indians, but you're all old news now. Unless Paul Brown rises from the dead to lead the Browns to six consecutive Super Bowls, it's going to be nothing but Buckeye haigography from here until they inevitably lose to their opponent in New Orleans (which will set off a Pavlovian response about how "unfair" it is that the Buckeyes had such a long layoff, or how a "well-intentioned" celebration dance kept them from winning, or...). All of this, of course, will be framed as a combination of hard work and "destiny" (even though it's mostly dumb luck, the outcome of a topsy-turvy college football year, and OSU's canny bulking up of their win total by scheduling multiple games against teams like Youngstown State and Akron; remember, "strength of schedule" only counts for those teams and conferences outside the BCS Good Old Boys club).

Greg said…
I for one wasn't looking forward to West Virginia versus Misial;akf... jfalkf... sorry, I fell asleep typing that. Of course, Ohio State bores me to tears as well and LSU isn't exactly my favorite SEC team. Frankly they look a little shaky this year so you might have to gear yourself up for a bunch of horn-honking rioting boozeheads come January 7th.
December 2, 2007 at 4:22 PM

Brian Doan said…
Jonathan,
Neither of those teams thrills me either-- I was just hoping to be spared all the local hype. It's just way too Groundhog Day for me after last year's silliness.
December 2, 2007 at 4:28 PM

Anonymous said…
Your "cling tenaciously" comment made me realize the resemblance between Chris Matthews and Powdered Toast Man.

digital_sextant said…
Fun fact: did you know the Buckeye tree is also called the "Stinking Buckeye" or the "Fetid Buckeye"? It's called that because its leaves and bark smell terrible when they decay. As a proud owner of a backyard Buckeye, I can confirm this.
December 3, 2007 at 12:28 PM

Brian Doan said…
Fun fact: did you know the Buckeye tree is also called the "Stinking Buckeye" or the "Fetid Buckeye"? It's called that because its leaves and bark smell terrible when they decay.

Brian Doan said…
Boolise--
And PTM is presumably sweet and tasty, two things no one says about Chris Matthews.

Jonathan--
Actually, being in Oberlin I'm kind of spared the "honking/burning" cars madness (that's for those crazy folks down south in columbs), but I don't look forward to all the local news coverage.
December 3, 2007 at 2:38 PM

Anonymous said…
Fetid Buckeye would be a fantastic name for a blog written by a disaffected OSU student who hates "all that football shit."