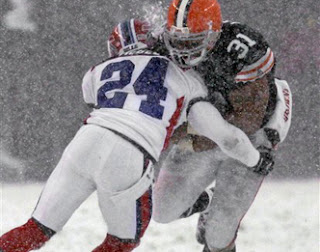 We still have a week or so before a playoff spot is confirmed, but this is a huge win for Cleveland. They maintained momentum from last week, fought through crazy weather, and defended their home turf against a rising Buffalo squad. And Jamal Lewis got 163 yards in the ice and snow, which is amazing. None of this makes them the Patriots, but these are the kinds of things a young team needs to do, and this game is another step in the team's development. It also guarantees a winning record for the first time since 2002, but unlike that Butch Davis group, this Browns season is exciting because it feels like the result of good, slow work by coach Romeo Crennel and GM Phil Savage to really build a team for the future. And that feeling hasn't been part of football in Cleveland for twenty years.
Labels: Cleveland football Sports

Greg said…
If the Browns make it past Pittsburgh or Jacksonville or San Diego (whoever they play in the wild card round) perhaps we shall meet in the playoffs. If they end up playing Indy I hope to god they beat them so we don't have to. That team scares me. They're the one team I don't feel confident about the Pats beating. They could ruin it for Pats fans everywhere.
December 17, 2007 at 9:09 AM

Brian Doan said…
The Colts are a good team-- I imagine if anyone's going to take down the Patriots, it will be them. I forgot to mention the delicious bonus of having the hated Ravens be the team Miami finally beat-- nothing like watching a petulant brat like Brian Billick at a press conference.