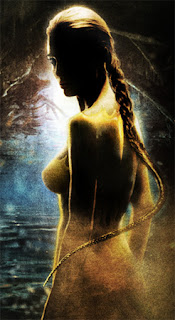 Sitting in the Apollo (Cineville's beloved second-run theater) last week and watching this interminable CGI monstrosity, I just kept imagining our titular hero's pomposity as played by everyone's favorite Ron Burgandy. "YEAH, I killed the Grendel!," Ferrell might comically swagger, while backed by a Wiglaf played by John C. Reilly (my friends Tyke and Mess observed that the King might be played by Christopher Walken). After all, in many ways this Beowulf is already the year's funniest comedy. I'm not sure if I was more amused by the creepy, "uncanny valley" look of the humanoid animations, the frozen-in-adolscence depictions of prudish sexuality, the Shrek-like figurations of Beowulf's fighting men in battle, or the way that Beowulf looked strikingly like Nick Nolte while being pulled along by the Golden Dragon at the end. "I wonder if Anthony Hopkins was really drunk when they filmed him?," I wondered, as Hopkins' character seemed smashed throughout the proceedings (and really, who could blame him? This castle-bound king is a far cry from the dark, brooding majesty of his prince in Lion in Winter). But that's just it-- absent any kind of referent in this CGIfied space, we have no sense of the characters' real bodies, no sense of the blood being spilled. I'm not a luddite-- there are a lot CGI animations I love. But, Grendel aside (and Crispin Glover is really quite touching in the role), there's no reason for this film to be animated, no advantage it gains by having the whole thing processed through the computer. In fact, it loses quite a bit: any sense of texture and grit, any feel for the stakes of the violence, any empathy for the expressive faces, and, above all, any sense of sensuality. Sex is a pretty big motivation in the film's narrative, but the CGI completely robs the bodies of their heat and sweat. Compared to the wacked-out brilliance of something like Excalibur, a film I thought of a lot while watching it, Beowulf is all metallic surfaces and styrofoam rock. Boorman's vision worked because the character's desires and passions dovetailed with his own overheated cinematographic techniques (the naked beautiful people didn't hurt, either); Zemekis's vision fails because Beowulf's narrative demands a rawness that his technique is incapable of, at least here. The only person who comes out well is Angelina Jolie, possibly because she's already an otherworldly cartoon: with her large eyes, slick hair and sly grin, she's immediately a more charismatic presence than anyone or anything else on the screen. For the most part, though, the film is as empty as the theater (six people full!) I saw it in last Wednesday, a cavernous space that's ripe for snide humor.
Labels: Cartoons film criticism movies Robert Zemeckis

Brian Doan said…
Yeah, Excalibur is pretty great-- I finally caught up with it this summer, and loved its passion and loopy sense of humor.
December 17, 2007 at 11:25 PM