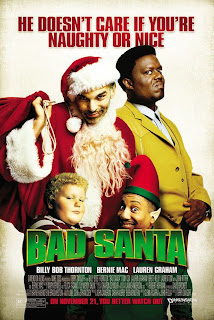 So, I had this idea to do a month-long series of Christmas-related YouTube posts. It was inspired in part by the kinds of cool video grabs and posts that Larry often does, and in part by insomnia: turning on my tv one night, I caught the last five minutes of Shop Around The Corner, and knew I wanted to post it to my blog. I didn't (it wasn't available, I'm still learning DVD grabbing, and I posted a different clip from the film instead), but it did cause me to think-- why not do this the whole month? A theme! A theme that wasn't opaque, that felt seasonal, that would be fun, certainly for me and hopefully for my audience! I also thought it was broad enough that it could encompass Whitmanesque multitudes: obvious canonical clips (gotta get Jimmy Stewart in there), campy pokes at holiday traditions, creepy spins on the season, offbeat music videos, friends' suggestions, and good, old-fashioned sentiment.

At first, it was fun-- I'd search for clips, do subject searches on IMDb to make sure there wasn't something I'd forgotten (The Godfather! Of course!), and map out what order I'd put the clips in for greatest effect.

Then, it got to be a drag: "Oh, right-- the stupid Christmas thing. What else can I post?" I'd be thwarted by lack of available texts-- "Why doesn't anyone have Christmas in Connecticut up on YouTube? How the frack can there be thousands of tributes to Alyson Hannigan, but nothing about Barbara Stanwyck??"--and eventually saw the whole idea as an annoyance. I work so hard to not write from a position of obligation-- in many ways, this blog is about writing precisely against the sense of martyred 'authenticity' that kills the pleasure of the text--and here I'd created a pattern of obligation for myself. Sure, I usually blog every day, anyway, but about different stuff, not the same theme over and over. And while this technically wasn't "writing"-- another reason I did it, as I wanted that Benjaminian sense of the image sans captions (well, besides the post title)--it was still an every day obligation. And I grew to dislike it.

Then, it was fun again-- I'd moved through many of the intial clips I'd wanted to show, and had fun finding other stuff to post, like Billie Holiday. And in ending with A Charlie Brown Christmas, which had always been my plan, I was reminded of the spirit that had initiated it all in the first place.

Why is he telling you this, you might ask? Because it wasn't until I read Jeff's post, catching up on the blogosphere after the holidays, that I realized this whole blogject ended up replicating the protocols and trajectory of academic writing: choose a topic, idea, or area that interests you; dive in with great enthusiasm and vast plans; feel invigorated by what you're doing and the response it gets; realize there's way too much out there to cover in the topic you've chosen, and also not enough available resources to make it click the way you'd imagined (who the hell checked out this book??!? Why doesn't the library carry this?? I hate interlibrary loan!); hate your project, dread your project, wonder why you ever started this project that you now carry around like Marley's chains; chill out, take a break, realize you are actually doing fine; find that second wind just as the project wraps, and say goodbye to it with surprising melancholy, given the stress you've caused each other.

That's the MA thesis, the diss, the article, and I imagine the book project (although I'm only just working up to that last stage). I exaggerate a little-- a blogject is fun, not work, and isn't nearly as difficult-- but without knowing it until it was finished, I'd somehow transferred the same intellectual and emotional responses into this different sphere. Is it simply a matter of authorial personality? Do the structures of obligation (not the "I need to do this" of desire, but of socialization and expectation (even if that 'expectation' is just in your head) always create what Jeff calls the "un-obsessed writer", regardless of space or project? Was finding this out the "secret santa" gift the blogject ended up giving me? And as we hurtle towards 2008, what kinds of new year's resolutions might I make about writing, about figuring out a way to make structures of obligation a generator of desire, rather than a destoyer of it?
Labels: 23 Days of Christmas Anecdotes Blogging Theory Writing Yellow Dog

Greg said…
I've missed you in the blogosphere. Good to have you back.

What you wrote probably every blogger has experienced at one time or another. I remember I couldn't wait for October to end so I could move on to something else besides horror. Then I jumped right into another "Theme" - pre-code and code-era films - that I enjoyed much more than Shocktober but still felt a pang of obligation.

On my new blog I have decided that I will not tie myself down with themes ever and it's really liberating. I can concentrate on the classic films I love to discuss on Cinema Styles and at my other place do new movies, books, old ads, youtube links, sports, whatever. I might even test the political waters again there soon but I'm not sure.

The point is a blog is a form of personal expression that we do in our free time without pay (well, 99% of us that is). So why in god's name should we restrict ourselves voluntarily? It's nuts. And yet we do. I think in the end, no matter how personal, we all want an audience (or we'd just be writing in a diary at home) and we feel if we're too random we'll lose their attention. So we categorize and organize and link things thematically.
December 28, 2007 at 9:40 AM

Greg said…
Where are you? I'm going through comment reply withdrawal here. Throw me a scrap, anything.

Oh by the way, there was a game of some sort on tonight. Giants against some team from New England. I think the New England team won. Can't remember their name though. Starts with a "P", you know, as in "Perfect." Hmmmm... well, I'll think of it eventually.
December 30, 2007 at 12:13 AM

Brian Doan said…
Hey Jonathan,
Sorry! Just busy with holidays and travel. I like your new blog-- I've gone over a couple of times since you posted the link, and I"m looking forward to exploring some more. I hear you with the "sticking to a theme" thing-- I think one of the reasons i named my blog so broadly was that, while I knew film would be a big part of what I wrote about, I didn't want to be tied down to one subject-- I think my brain is just too peripetitic to stay focused that long. (: I think you do it really well, though-- your Oscar posts are very smart and enjoyable, and you've done a good job of suggesting how primarily focusing on one area (I know you cover a lot of cinematic topics, but I think most often of your classic Hollywood posts) can reap rich dividends- -after all, "Classic Hollywood" covers a really broad time and space and stylistic period.

In response to your previous comment (under the "It's A Wonderful Life" clip)-- that's cool you got to see the Coens' film, and I read your blog review while skipping over parts in order to stay mostly unspoiled. I will get to seeing it eventually, although the incessant drumbeating on blogs and in papers and magazines almost has the curmudgeon in me sick of the movie already. (:
December 30, 2007 at 12:32 AM

Brian Doan said…
Oh, and the Patriots thing-- yeah! Congratulations-- anyone who beats Eli Manning is good in my book. I was actually watching the Penn State game, but I saw the tickertape, and feared the incessant Eli-love that ESPN would've spewed for weeks if the Giants had won. So I thank your guys for sparing us that.
December 30, 2007 at 12:35 AM

Anonymous said…
Hey, Great post, and hope I'm not too late to comment. I love your ideas here, building on Jeff's, about obsessed and unobsessed writing. But I often wonder if it's just as much about being obsessed with _writing_ itself as it is about the subject matter. That's not to say that having a clear focus and a subject that resonates personally isn't important--of course, it is. It's just to point out also that, for me, it's often that sitting down to write _precedes_ ultimately where my project (however big or small) ends up going. I suppose that, for me, there might be a general obsession (cinema) or specific one (moment from a Hitchcock film, e.g.), but it's also about a certain level of obsession with the act of writing itself that drives the project.

I also wonder if there is a more dialectical relationship here--that only upon feeling the drag of obligation that you all describe does one's best writing come out. That is, only after feeling the obligation--and the dread one rightly associates with it--does one find the energy to return to writing with the kind of vigor one sets out with in the first place!