Why Are There So Many Songs About Rainbows? 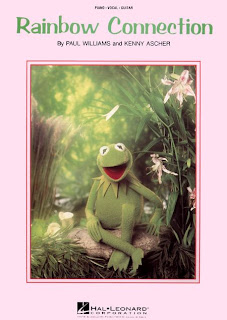 The rain came to Cineville this weekend, washing away much of the beautiful snow we got last week. It's all slush and gray, dead grass and leafless trees right now, although the Christmas lights are still up and glittering. That combination of rain, light, melancholy and beauty (combined with some animation searches for teaching, and Brendan's recent reminder of that underrated Christmas curio, Emmit Otter's Jugband Christmas), made me think of "Rainbow Connection," the lovely theme song to 1979's The Muppet Movie. Written by Paul Williams and performed in the film by Jim Henson as Kermit (in a head voice shot through with winning naivete), I always thought the song was an interesting one to open a childen's film. The soaring melody and Henson's compressed vocal range give it an appropriately child-like wonder, but the lyric seems to challenge the very dreams and myths the melody conspires to invoke:

Who said that wishes
would be heard and answered
when wished on the morning star?

Someone thought of that
and someone believed it.
Look what it's done so far.

What's so amazing
that keeps us stargazing
and what do we think we might see?

Henson's clipped vocal-- how he strains, rather than easily hits, a high note-- contributes to this slight damper, but also suggests its ultimate resolution: that, no matter how foolish or illusory the rainbow, it's the striving towards it that really matters.

I was going to put up the clip from the film, but when I got to YouTube, I was amazed to discover 544 different renditions of the song were available; clearly, the Williams-Henson vision is one with broad appeal (as the song itself says, "it's probably magic").

First, the original Kermit version from The Muppet Movie:

Two years later, Kermit would do a duet with Debbie Harry on The Muppet Show:

That same year, 1981, the Carpenters would record a demo take-- not finished and released until after Karen's death:

Other versions have played with the meaning of the song, as in the underrated Peyton Reed film, The Break-Up , where the film's a cappella group, the Tone Rangers, find a way to sincerity through irony:

Sarah McLachlan's version of the song suggests that "rainbows" have a political and sexual connotation in their dreams of utopic harmony:

Here's a live version by the Dresden Dolls:

And another, much more intentionally funny, by Office/Daily Show star Ed Helms:

And finally, my favorite version, recorded by Willie Nelson in 2001 for a children's record called Rainbow Connection:

To see Nelson himself perform it in a striking video, follow this link. Universal Music Group, in their infinite wisdom, doesn't allow embedding, but it's worth watching anyway, and I love the Django Reinhardtish solo at the end.
Labels: Fun With Video movies Muppets Pop Music TV

Brian Doan said…
Evan--
As a Blondie fan, I really liked the Debbie Harry one, too-- it's a nice reminder of how sweet and culturally diverse the old Muppet Show was, too.

Brendan--
I know what you mean about the Nelson version-- I downloaded it from I-tunes and have been listening to it a lot.
December 11, 2007 at 3:40 PM

Anonymous said…
Wow. What a beautiful collection of this amazing song. Thanks and Happy New Year
January 3, 2008 at 1:40 PM