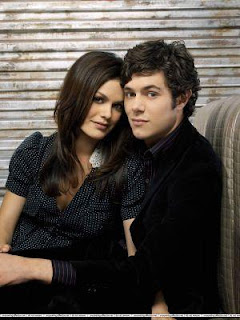 Seth: Do you have any idea how pathetic it is to listen to you talk about mergers while some guy just stares at your boobs?
Summer: Which guy was staring at my boobs?
Seth: Who cares? The point is if that guy doesn't know you, he doesn't care who you really are. He has no idea that every day of third grade, you shared your lunch with that little skinny squirrel who kept getting his nuts stolen by that fat squirrel.
Summer: I hated that mean squirrel!
Seth: And, none of those guys were there when you had to read your poem out loud in class and your hand was shaking because you were nervous and you cared what the other kids thought.
Summer: Poem? What poem?
Seth: I Wish I Was A Mermaid.
Summer: You remember that? That was, like, sixth grade.
Seth: "I wish I was a mermaid and was friends with all the fish, a shiny tail and seashells, that's—
(Summer kisses Seth)
Seth: —what I would wish.

Charming on Gilmore Girls, desperately needy in Thank You For Smoking, and so winningly emo on four seasons of The OC that we're almost willing to forgive In The Land of Women-- happy birthday, Adam Brody.
Labels: Adam Brody Gilmore Girls Josh Schwartz Rachel Bilson TV You Say It's Your Birthday

Anonymous said…
Dave Rygalski: A few weeks ago you told me that Lane had a crush on me. Well, I have a crush on her, too. Now, I know you have very strict rules about dating and boys, but I just want you to know that I'm a good person. I don't smoke, I don't drink, I've never gotten a ticket, I'm healthy, I take care of myself, I floss. I never watch more than 30 minutes of television a night partly because I think it's a waste of time and partly because there's nothing on. I respect my parents, I do well in school, I never play video games in case they do someday prove that playing them can turn you into a serial killer. I don't drink coffee. I hate soda because the carbonation freaks me out. I'm happy to give up meat if you feel strongly about it. I don't mind wearing a tie. I enjoy playing those hymns on my guitar, and I really, really want to take your daughter to the prom.

Too bad he betrayed Hep Alien by "going off to college in California." Hey, I wonder whatever happened to ole Dave?
December 16, 2007 at 1:24 AM