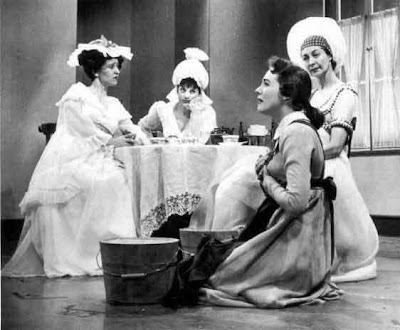 Alice Ghostley, star of stage, screen and television, passed away Friday after what the AP is describing as "a long battle with colon cancer and a series of strokes."

Ghostley was perhaps best-known to contemporary audiences as Esmerelda, the housekeeper on Bewitched, or as ditzy Bernice on Designing Women.

But before her late-career, Emmy-nominated success on sitcoms, she had a long and very colorful career as a brilliant comedic actress. She debuted in the revue show "Leonard Sillman's New Faces of 1952," and three years later was cast in the Leonard Bernstein show "Trouble In Tahiti". She was nominated for a Tony for her role in 1963's "The Beauty Part," and finally won two years later playing opposite Rita Moreno in Lorraine Hansberry's “The Sign in Sidney Brustein’s Window.” Her film credits included Grease and To Kill A Mockingbird.

For me, however, she will always be the loveable-in-spite-of-herself stepsister Joy, in the 1957 television production of Rodgers & Hammerstein's Cinderella. Sadly, YouTube lacked clips of Ghostley's performance in this show, but it's available on DVD, and it's worth tracking down. The show was R&H's first original show for television, written specifically for Julie Andrews, then hot from her success in the original Broadway production of "My Fair Lady." It was seen by 107 million people when broadcast on March 31, done live (which leads to two amusing flubs) and captured on kinetescope. Andrews is marvelous, of course, as is Edie Adams as the fairy godmother, but I think Ghostley and her partner in crime, Kaye Ballard (as stepsister Portia) steal the show. Ghostley is wonderfully dry-- for those who know her only from Designing Women, it might be a surprise to see her as the slightly smarter of the two sisters, looking askance at Portia's rather oafish attempts to seduce the prince. But she's only slightly smarter: Ghostley's gift is to convey an exaggerated sense of her own savviness, floating in a bubble of cynicism that occasionally gets popped, and allows us glimpses of the insecurity behind her mask of bravado. Too heavy an analysis for the stepsisters? Perhaps, and I would also be remiss if I didn't mention her superb physical comedy, and willingness to take pratfalls and be the butt of jokes. Still, it's a measure of R&H's supreme generosity towards their characters-- which, Ethan Mordden rightly notes in his book on the duo, is their most lasting contribution to musical theater narrative--that the supposedly "evil" stepsisters are rather goofy and appealing here. The Great Performances description (upon the discovery and broadcast of the kinetescope in 2004) is dead-on:

Hammerstein's script is a marvelous piece of romanticism. He downplays the fantasy elements of the old story (this godmother seems more like a caring relative than a fairy) and goes for the honesty of the characters, never talking down to his audience even in the context of a children's story. He also avoids stock villains, turning the Stepmother and Stepsisters into funny, self-absorbed brats rather than vicious antagonists. Hammerstein gives the Prince, always the least interesting character in the tale, a sincere and thoughtful persona. This Cinderella is not a weepy, put-upon girl but a forthright and level-headed heroine, and Andrews plays her with nonsensical charm. The cast is superb, down to the most minor role, and the unfussy direction gives the show a straightforward and matter-of-fact confidence that most family entertainment lacks.

If Hammerstein's book enhances the stepsisters through dialogue, the score is where R&H's true affection is revealed: the wonderful "Stepsisters' Lament," sung into the camera as if to a mirror, while powdering their noses at the ball, at once gives voice to their brattiness while also slyly calling into question the underlying myths of the fairy-tale form:

Why would a fellow want a girl like her,
A frail and fluffy beauty?
Why can't a fellow ever once prefer
A solid girl like me?

She's a frothy little bubble
With a flimsy kind of charm.
And with very little trouble
I could break her little arm

Why would a fellow want a girl like her,
So obviously unusual?
What can't a fellow ever once prefer
A usual girl like me?


Her cheeks are a pretty shade of pink

But not any pinker than a rose is

Her skin may be delicate and soft

But not any softer than a doe's is

Her neck is no whiter than a swan

She's only dainty as a daisy

She's only as graceful as a bird

So why is the fellow going crazy?

Not only do the stepsisters get the best song in the show (a show overflowing with great tunes), but Rodgers signals his allegiance by making the song's melody the heart of the overture, as if to suggest this is less a tale about "Cinderella" than a show about dreams and hopes in general-- "Impossible things are happening every day," the fairy godmother sings, and that belief in the power of the imagination, which Mordden notes runs through nearly all their shows, finds its best, most humanist expression here. This, in the end, is why R&H's Cinderella is the most valuable of all the cinematic/televisual versions of that tale: it allows every character a voice, a personality, and to paraphrase Jean Renoir, makes sure "everybody has their reasons," even the ironically-named Joy. Ghostley herself once expressed a very Joy-like attitude towards her career possibilities:

"The best job I had then was as a theater usher," she said in a 1990 Boston Globe interview. "I saw the plays for free. What I saw before me was a visualization of what I wanted to do and what I wanted to be."

She was well aware of the types of roles she should pursue.

"I knew I didn't look like an ingenue," she told The Globe. "My nose was too long. I had crooked teeth. I wasn't blond. I knew I looked like a character actress. 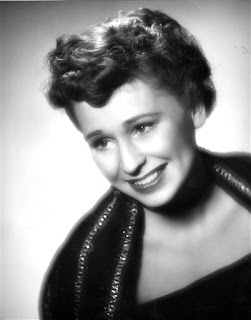 UPDATE (7:34 p.m.): The excellent Edward Copeland has also posted a nice tribute to Ms. Ghostley, with a more complete listing of her credits. Mosey on over to his site and stay awhile-- there are a lot of great reads there.
Labels: Alice Ghostley movies Musicals Obits Theater TV