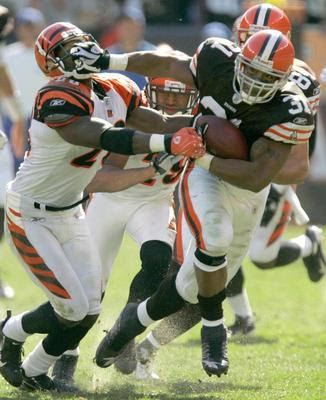 Home from a screening, Emmys in the background (hey! Terry O'Quinn won-- cool! I've always liked him. But what's up with the "theater in the round" staging? Good, Jon Stewart just made fun of it, too), my head somewhat cold from the dropping temperature, but still alive with memories from a fabulous day of football. I mean, wow! I had expressed reservations about some of the Browns' moves this week, but damned if they didn't play extremely well today. I will continue to hold my breath every time Derek Anderson touches the ball-- his scrambles and last-minute throws often look like they will end in disaster, and he did have some "where was the receiver??" passes, and one bad interception; still, five touchdown passes (five??) and no sacks, as well as the building confidence of the offense throughout the game, speaks to his example and leadership. It helps that he has some superb weapons surrounding him: two touchdowns from Braylon Edwards (no doubt inspired by his alma mater's superb game yesterday), including one spectacular end-zone dive and another remarkable play on the 25-- a great catch, the ball bouncing off his stomach until he recovered it in his arms for the completion; two from the quietly consistent Joe Jurevicious, who goes out without flair and becomes a touchdown machine; and one from Kellen Winslow, capping a day of great receptions at key moments to stretch the offense and get first downs. 29-year old Jamal Lewis looked like a Pro Bowler, rumbling for one touchdown, and squeezing extra yards out with four and five defenders on his back (he also has the biggest arm muscles I have ever seen). The defense was porous as hell-- I've never been at a game where a team scored 51 points and the game was still a nail-biter-- but Leigh Bodden (who wasn't even supposed to play) made a great interception to seal the game and send the crowd into delirium. You can live near Cleveland and cheer for the team and read about their Sissyphusian history, but you can't know how much the town loves and lives with this team until you go to the game and see the ecstasy in the stands as it ends: it's only the second contest of the season, but it felt like a playoff game, as the crowd spilled over into the halls of the stadium, out through the doors, and all over the downtown-- a sea of brown and orange (some in dog-- excuse me, dawg-- masks), singing, laughing, chanting-- rows and rows of fans walking up the steps from stadium area to city as one gigantic, gloriously messy mass. Bliss.
Labels: Awards Cleveland football Sports TV