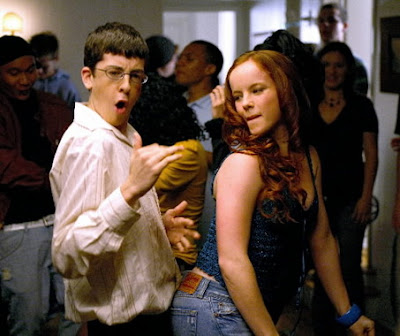 Cineville's only in-town theater (as opposed to the two multiplexes in nearby Illyria) is the Apollo, a second-run space, getting blockbusters and flops alike a month or so after they debut in larger cities (it also has a display window of "coming attractions" flyers whose contents change constantly, so one never knows if one's actually going to see Ratatouille, or Rush Hour 3). 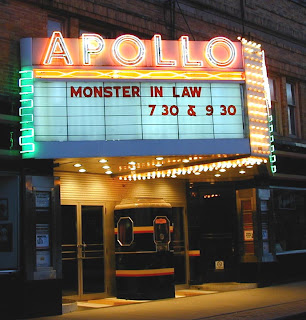 I like it: it's an old, one- theater space built in the 30s, complete with ornate interior design, rickety cushion seats, an atmospheric little lobby, and a big red curtain that opens to display the film. With an old-style, bulb-covered marquee (added to the theater in the 1950s), the whole place feels like you've stepped into The Last Picture Show, like you should be watching Red River instead of The Simpsons Movie. Plus, it's hard to beat $2 screenings on Tuesday night.

This week's offering was Superbad. As this film has been around and well-covered for a month or two now, I'll forego a full review and instead just offer a few quick impressions:

--First, a special thanks to the Ya-Yas who came in late and chose to sit behind my friends and me. I heard a series of loud giggle and guffaws, thinking, "Aw man, why do loud high school kids always sit near me?," only to turn around and see a trio of boisterous, "what-do-you-mean-I'm-not-in-my-living-room??" fortysomethings, who chose to keep up a loud Stadler & Waldorf routine through much of the movie. I'll admit it added a surround-sound layer of irony to the adolescent antics onscreen, and sometimes caused unintentional humor-- "Oh, lord, why did they have to show THAT??...Man, to be a teen again...," etc. I also really liked the guys a few rows back on our left who moaned salaciously at key moments in the film. Good times, good times.

-- As Judd Apatow projects go, this one is closer in spirit to Freaks and Geeks than Ricky Bobby, which is a very good thing. Dennis made some interesting comparisons awhile back to Dazed and Confused, and I think what both films have in common is a tremendous spirit of generosity: with the exception of a token bully in each film, both Dazed and Superbad exude a good-natured charm and love of their characters that makes the viewer feel like he's entering into a welcoming community, a place where even the most abject will have their epiphanies and moments of glory (I'd always thought Freaks and Geeks felt like Dazed and Confused in extended television form). That was a defining characteristic of The 40-Year Old Virgin and Anchorman, too, but it got lost on the Apatow-produced Talladega Nights, where with the exception of the wonderfully funny Sacha Baron Choen, everything felt like an unironic ESPN long-form commercial, full of that network's offputting combination of macho belligerence, jingoistic sentimentality, and endless celebration of the dumbass. I didn't see Knocked Up, but heard it suffered from a similar mix of unstable elements.

Superbad is much more fun. In addition to Apatow, the behind-the-scenes talent includes director Greg Mottola, a veteran of TV cult comedies like Undeclared and Arrested Development, and the writer-director of the lost indie classic The Daytrippers (which contains brilliant work from Hope Davis, Parker Posey Stanley Tucci, and Liev Schrieber, and which, like Superbad, uses the one-day "road trip" form to say something both hilarious and poignant about family). Toss in screenwriters Seth Rogen and Evan Goldberg (doing double-duty in the film as incompetent cops), and you have a creative team well-balanced between the wry and the gross, who understand that dick jokes and true love are not mutually exclusive. As in Freaks and Geeks, Apatow & Co. are throwing a party, and everyone-- and every comedic style-- is invited to dance.

--About those dick jokes: as Judi Dench might say, "Good Lord!" In my wildest thoughts, I never would've imagined that there were so many visual permutations, so many verbal riffs, so many ways one could draw a penis on a page. More than any other element of the film, it's a prime example of Superbad 's aesthetic of "sincerity through excess": it's funny, then it's too much, then it's funny again, all in the space of about three seconds. What ultimately makes the constant scatology funny and, yes, heartwarming, is its matter-of-factness. There were moments when it felt like a Kevin Smith movie; but unlike that soon-to-be-center-square auteur's characters, the kids in Superbad don't take a "nudge nudge wink wink" ironic distance to the material; there's nothing that's meant to feel arch or distancing or shocking. Instead, it's just how they talk, and it flows from their mouths so undramatically that it gives the language a realism (because 18-year old boys often do just talk and talk about this stuff in the most explicit of ways) that makes it oddly empathetic and naturalized. And once that stylistic/possibly moralistic hurdle is crossed, it makes identifying with the lead trio and their various friends and companions much easier.

--The teens are extremely well-cast, and kudows to Mottola and Apatow for getting actors close in age to their characters (only Jonah Hill, as the deliriously abrasive Seth, is 24). Hill is like a human version of Cartman, choosing to not filter between brain and mouth, and finding endless ways to rope his friends into his schemes. Michael Cera is quite loveable with the thankless role of Evan-- other than a serenade to cokeheads at a party, he's generally the Richie Cunningham figure here, the stable center amidst the craziness, but Cera holds that center well-enough to make the later, richer emotional turns of narrative really pay off. And what can be said about Christopher Mintz-Plasse? Playing a nerd stereotype is hard, but he embodies the truly geeky Vogel/McLovin' with a sense of hard-earned cool. The nice twist is that McLovin' is not a put-upon outcast, a Willow, the way he might be in other films-- he genuinely believes he's a bad-ass, and all evidence to the contrary won't stop him from making the scene. It's a wonderful spin on the type that Mintz-Plasse nails, and it happily drains the film of treacly sentimentality. As objects of affection, Matha MacIssac and Emma Stone have less screentime than the boys, but they are both very good, like Mintz-Plasse hitting unexpected, jazzy notes in their characters, and fleshing out what might have been dopey caricatures; while I wish they had more to do, I did appreciate the moments that suggested, as in Virgin and Geeks, that the women here are far smarter and savvier than their well-intended boyfriends.

--The next day, watching scenes from Shoot The Piano Player with my students in class (the scenes in the car between the gangsters and Charlie and Lena), I was suddenly struck by how much they reminded me of the scenes in the police car in Superbad. This is partially just a similarity of framing, but I think it also speaks to the juggling of tones both films share, and the generosity of spirit, both within the narrative and in the ways the film plays with genre-- there are no true "bad guys" in Superbad, no real divisions between jocks and nerds and brains as in other teen-centric films (and thankfully no Chad Michael Murray). All that's really needed to overcome those false divisions, the film suggests, is confidence, honesty, friendship, and love (plus a fake ID, a cannister of laundry detergent, sympathetic police officers, and pizza bagels).
Labels: movies Oberlin

Greg said…
You had to bring up the Dennis post. Sal, Bill and myself got that comment section so far off track Dennis had to come in and break it up. To this day when I see Bill's name in the comment section there I want to make an "entity" joke but I'm afraid it might start things all over again and Dennis will hate me.
September 27, 2007 at 10:54 PM

Brian Doan said…
Well, I wasn't trying to embarass anyone-- I'm not the Ben Affleck character from Dazed and Confused (: I just thought it was an interesting conversation, and worth linking to. Oh, and I've really been enjoying the still-life series over at your blog-- those movie posters are great!
September 27, 2007 at 10:57 PM

Greg said…
It's Dennis' fault. He makes the forum too open, congenial and engaging. If only he were more a hard-hearted taskmaster. Damn him for being so nice!

And thanks for the compliment. It may sound shallow (or Chance the Gardner like) but I love movie pictures and I love posting them.
September 28, 2007 at 8:04 AM