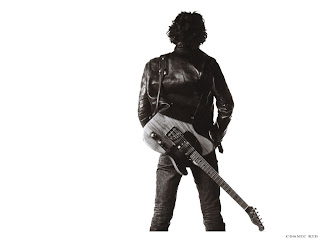 The great and powerful Shamus has been doing some nice stuff about Bruce Springsteen this week, including one brilliant post about the Boss's cinephiliac tendencies. Now, as if to prove his point, today's New York Times has a great article about Springsteen written, not by a music reporter, but by estimable film critic A.O. Scott. I suppose there's some pun about letting your screen door slam and revving up your engines to get on over to the site, but I'll spare you my deathless Springsteen pastiche (I was born in Jersey, after all), and just encourage you to mosey over to Scott and Shamus's pieces for good reads (perhaps with Tunnel of Love in the background).
Labels: Bruce Springsteen Media Pop Music Shamus/Larry