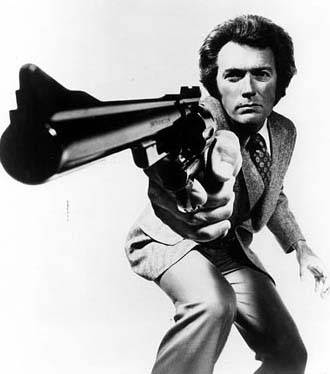 A busy two weeks of school starting up meant that Zodiac had been sitting in its Netflix envelope by my TV for roughly the same amount of time. Inspired by the ever-groovy Shamus, to finally break it out Friday night (how can you not trust a man who loves Sinatra?), I've been turning it over in my head ever since, and I'm still not sure what to make of it. Is it a great film, or a film with great parts? Is its sprawl-- the way perspectives shift from one character or group of characters to another, then back again, a true ensemble effect--by design, or a sign of material lost in the edit? (It's odd-- at 158 minutes, it feels alternately interminable and somehow too short. To return to one of my favorite movie references: "The food here is terrible!" "Yes, and such small portions!") And the food David Fincher offers isn't terrible, just slightly overcooked.

I'd avoided much of the commentary on the film when it came out, but my immediate impression (as it turns out,also noted elsewhere) was how much it resembled All The President's Men: the newspaper duo who investigate (one of whom smokes everywhere, and is played by his generation's leading character actor), the meetings in the editorial room, the repeating close-ups of important calls at newspaper desks, the overhead shots of the city, even the use of a David Shire score. It's not as good as All The President's Men-- for me, one of the three greatest American films of the 1970s--and it lacks the earlier movie's quiet paranoia, and of course the brilliant work of Gordon Willis. Shamus's excellent post--he likes the movie a lot more than I do, but makes great points and connections-- explores the possibility that this is a more grown-up work by Fincher, an attempt, in Shamus's lovely phrase, to keep "his eye on the long ball." More from Shamus:

For the first time, Fincher tamped down the flourishes and trickery and made that classic, focused, in-the-moment, Gordon Willis-like dark ‘70s movie he probably always wanted to make.

I can see what he means-- the acting is superb (particularly the layered work from Mark Ruffalo, who exudes both calm professionalism and a bit of jitteriness throughout), and there are moments of sustained tone that are sometimes breathtaking (most obviously Robert Graysmith's meeting with the revival theater manager, but also in smaller gestures, like the scene between Gyllenhaal and Adam Goldberg in the newspaper office, or the moment on the boat with Robert Downey, Jr.). But I could never shake off the sense of straining for Significance that kept coming through, and it's worth questioning whether "seriousness" and "tamped down" should be equated, as they are in many reviews of the film I've read. One of the joys of Fincher's earlier work was its delirium, its sophisticated spin on a kind of 80s trash aesthetic-- The Game, for instance, looks like a Tony Scott movie, but doesn't feel like one: he's spooking cliches and working through them to offer us more fully-drawn characters and situations. His skill with actors was always apparent, and is on display in Zodiac, but the film feels flat and washed-out: it's too easy to see the rather exhausted thesis statement at its core.

Reading and skimming through various online reviews Saturday afternoon, I kept reading about a film that felt far more interesting to me than the one I saw; via Jim Emerson, for instance, I found this link to the priceless Mahnola Dargis, whose description of Downey is much richer than the movie itself:

There’s a moment early in the film when Mr. Downey stands in the Chronicle newsroom, back arched and rear gently hoisted, affecting a posture that calls to mind Gene Kelly done up as a Toulouse-Lautrec jockey in “An American in Paris.” Avery has already started his long slip-slide into boozy oblivion, abetted by toots of coke, but as he strides around the newsroom, motored by talent and self-regard, he is the guy everybody else wants to be or wants to have.

That's extraordinarily fine writing--allusive, witty and deeply felt--and in fact, there's a lot of great criticism on the film out there; I think one could easily put together a volume on Zodiac that could almost replace the film as a cinephiliac experience: like the stories in the film, the commentary and coverage come to engulf the actual event. I think that's true of a lot of writing on that 70s period of American filmmaking that so inspired Fincher; of course, so many of those films are superb, but the critical moves of the last decade or so to valorize the period and so many of its movies and figures-- driven by a combination of movie love, historical curisosity, nostalgia (or longings for what we were too young to experience ourselves), theoretical passion, and perhaps a smidgen of rebellion against the similar valorization of 30s and 40s Hollywood-- does often leave us with texts that shimmer as brightly, or brighter, than the films they look at and remember (I'd much rather read Reeling than watch Carrie, much rather look at Moving Places than watch On Moonlight Bay). Is this a kind of Borgesian cinephilia, where the exegesis has replaced the event as the most sensual of texts?

As I thought about it, it struck me that Zodiac is a discourse, not just on President's, but nearly all the 1976 Best Picture nominees: the cynical urban malaise of Taxi Driver, with its scenes in cabs and cars, and its lonely central figure obsessed with cleaning up crime in the city (while having awkward dates with blondes); Network's commentary on media culture and the failures of television (Brian Cox is a marvelous Melvin Belli, both earnest and full of calculating self-regard); even Rocky's tale of the underdog who goes the distance, and manages to lose and win simultaneously in the end, and is quietly revealed as something of an egomaniacal underdog to boot (I can't figure out how Bound for Glory fits into this thesis, I must admit...).

Satuday, with Zodiac roaming around in my noggin, I read this depressing Glenn Greenwald commentary in Salon, then today this piece from the reliably pissed (and I mean that in a good way) Bob Sommerby. Teaching All The President's Men last spring, I made a joke about how old-fashioned it seemed: "Remember the days when The Washington Post would actually assign its reporters to investigate government cover-ups?" If Zodiac speaks to a certain nostalgia for 70s cinema, it also speaks to a nostalgia for 70s journalism, for the scrappy everyperson who goes after the truth, a powerful myth when the most honest person in the room is a comedian (who also can't resist a reference to 1976 cinema):

Anonymous said…
This is a really interesting post, and the comments from Shamus make me want to think about the film again. But for me, at least, Zodiac simply loses its momentum after the first hour, and I'm probably less interested in the remaining story than other critics have been. The acting is great, to be sure, as is the look of the film. But I felt as though the last 90 minutes could have been 60.
September 19, 2007 at 9:25 AM

Brian Doan said…
I agree-- it does tend to drag, but I also felt like, even though I didn't really want another hour, it could've used it-- that second half feels rushed, esp. the stuff with Graysmith's family.
September 19, 2007 at 12:21 PM

Anonymous said…
That's true--interesting to think that even more, not less time would have helped.
September 20, 2007 at 10:15 PM