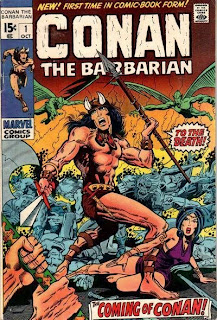 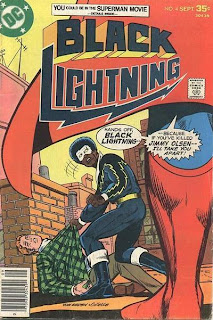 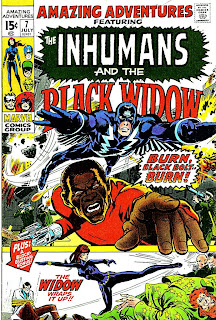 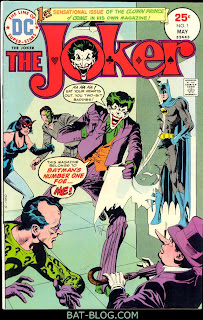 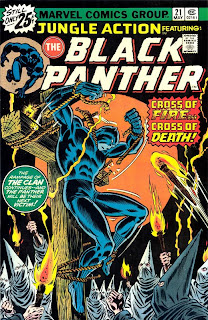 All of our emotion exists for those dear old American adventure films that speak of daily life and manage to raise to a dramatic level a banknote on which our attention is riveted [sic], a table with revolver on it, a bottle that on occasion becomes a weapon, a handkerchief that reveals a crime, a typewriter that’s on the horizon of a desk, the terrible unfolding telegraphic tape with magic ciphers that enrich or ruin bankers…
--Louis Aragon

It was Tax Day, and what better way to celebrate than heading off to the comics shop? In a nice bit of serendipity, April 15 fell on a Wednesday, which meant it was time to see what the pull list had brought in. Little did I know that my local shop, the excellent Infinite Monkey, would also have just purchased someone's collection, a long box of 70s pulp treasures that the Monkey's co-owner, Josh, let me rummage through. I found the issues shown above, as well as many more fun 70s comics, all at relatively inexpensive prices (and thanks again, Josh, for tossing in those extra Black Lightning issues free of charge-- you are a mensch).

I would've enjoyed finding these issues, anyway (I've always liked the Black Panther), but there was something extra-fun about encountering them in such a surprise fashion. In this post, "Comics Should Be Good!" writer Greg Hatcher explores the arcane pleasures of collecting, noting that it's not just the objects themselves, but the search for them that brings pleasure: "Apart from the 'smart shopping' factor involved in buying used and the great deals you can get, though, the plain truth is that I love the hunt. I get a big kick out of the act itself, of browsing through old bookstores and thrift stores, and most of the people I know feel the same way."

I think that's true-- although I have also acquired back issues through online dealers, there's something magical about rummaging through the long boxes, flipping past the garishly colored covers, feeling the object in your hands. It has to do with the relationship between knowledge and fetish, not just (per Barthes) the "pleasure of the text," but the pleasure of the texture, the thingness of the thing. To borrow a Surrealist phrase, it's about the "chance meetings" between collector and object, and the frisson of stumbling across that magic cipher.
Labels: Comics General Geekery Oberlin Surrealism

Brian Doan said…
Yeah, I was really excited to find that one. I'm not the world's biggest Conan fan, but I love Barry Windsor-Smith's art on almost anything, so I've always been curious about this title.
April 20, 2009 at 1:18 PM