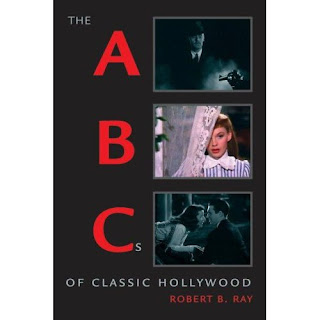 I am teaching Robert B. Ray's The ABCs of Classic Hollywood in my CINE 101 class this semester, so I was delighted to mosey over to Girish Shambu's blog (a place I hadn't moseyed to in far too long) and find that he was thinking about Ray's work in a new blog post (Full disclosure: Ray was my graduate school mentor, and he's kind enough to cite me in the footnotes of the book).

ABCs is a wonderful book, and Girish talks about it more here, but after briefly citing it, he moves to a different Ray essay, "Eight Film Studies Problems for the Twenty-First Century," which is collected in New Media/New Methods: The Academic Turn from Literacy to Electracy. In this piece, Ray thinks about film studies' place within the academy (and the academy's place within broader social discourses) by zeroing in on eight related issues of film writing and pedagogy. Girish-- one of the best film bloggers you will ever encounter-- chooses to focus on the question of "narrative synthesis," or how academic writers speak (or choose not to speak) to divergent audiences. As Girish notes

For Ray, film studies resembles the Civil War in having at least two distinct audiences: academic scholars who only or largely read books and articles written by other scholars; and a non-academic cinema-interested audience of readers who typically don't read academics. Ray proposes that we need scholars who can devise a ""narrative synthesis" that will "propagate professional knowledge about the cinema" to a non-academic audience-at-large.

What is meant, exactly, by the term "narrative synthesis"? I would say that, in the context of film writing, it names an approach that does two things: (a) it is simultaneously "high-level" (broad in scope--drawing upon a number of specialized subfields within cinema studies) AND "low-level" (paying attention to individual films and their details); and (b) it weaves together a "story" of sorts--just like a good piece of film criticism always "tells a story"--that interests and engages the non-academic reader.


I'm kind of obsessed with these questions-- it's why my dissertation is written anecdotally, and it's one reason I blog-- and the post at Girish's site kicks off a really fabulous discussion in the comments section. I recommend going over there if you are interested in points like the one Christian Keathley raises here:

In the 1955 version of The Man Who Knew Too Much, there's a magnificent moment, early in the film, when Doris Day and Jimmy Stewart are entertaining their mysterious new friend, Louis Bernard, in their hotel suite. There's a knock at the door and Doris Day goes to answer it. She opens the door and we see a close-up of an Asian man, partly obscured by shadows. The next shot shows the reverse angle, looking back into the room, with the characters positioned in distinct planes: Doris Day in the foreground right, Jimmy Stewart in mid-ground left, and Mr Bernard in the deep background center. In a carefully choreographed action, Day and then Stewart turn their heads to look at Mr Bernard, and then turn back again. It's a chilling moment that gains effect from the use of the frame -- both its depth and breadth -- and the coordinated rhythm of their heads turning. I've thought a lot about this shot and spent a lot of time in class with students, discussing its power.

But most current film scholarship would opt instead for "The Orientalism of Hitchcock's Marrakesh." It's much easier to adopt a posture of cultural superiority to great works, especially those of the past, than trying to think about the complex ways that they achieve their aesthetic power. Even if our recognition of that power is just a product of 'culture and history.'
Labels: Blogging Links movies Oberlin Pedagogy Robert Ray Theory UF Writing

Bob Westal said…
Hmm. I think that feeling of "cultural superiority to great works" is part of what soured me on academic criticism back in my film school days.
April 11, 2009 at 10:04 PM

Brian Doan said…
Hey Bob,
Yeah, I think it's all a matter of finding the right balance, the right synthesis, as Girish quotes Ray, for your analysis. I think one can do really great, politically inflected film work, but the danger Chris points out in that quote is also real, and ultimately very annoying (at least to me).
April 13, 2009 at 12:13 AM

Bob Westal said…
And, obviously, to me. I got in some big arguments with my TAs over Hitchcock back then. "The Dark Side of Genius" was on everyone's mind and so they basically reduced everything he did to simple misogyny. (I.e., "Rear Window" was really about Hitch's desire to see Grace Kelly suffer the same fate as Lars Thorwald's wife.)
April 13, 2009 at 7:38 PM