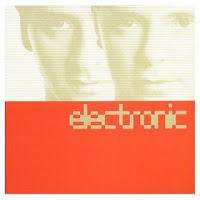 I downloaded a bunch of Electronic from I-Tunes the other night, suddenly feeling a real urge for the music I listened to during my freshman year of college (Electronic was the too-brief partnership between ex-Smiths guitarist Johnny Marr and New Order mastermind Bernard Sumner, with occasional assists from Pet Shop Boys' Neil Tennant and Chris Lowe). Listening to tracks from their 1991 eponymous debut-- with that wall of sound created by the interplay of thick keyboards and omnipresent drum machines, the atmospheric color of Marr's guitar licks, and the moody melodrama of Sumner and Tennant's multi-tracked vocals--I kept thinking that this was the perfect score for a Bond movie that never was. The Bond series was on hiatus in the early 90s while various legal snafus were sorted out, but it's not hard to hear this highly cinematic music offering an ironic buttressing to what, in Never Say Never Again, was described as the "gratuitous sex and violence" that are Bond's bread and butter.

The spirit of John Barry is far more present in "Get The Message's" melange of insistent blues licks, synthesized horn-and-string sections, and processed vocal whispers than it is in a million bad Madonna or Chris Cornell title songs.
Labels: General Geekery James Bond movies Pop Music