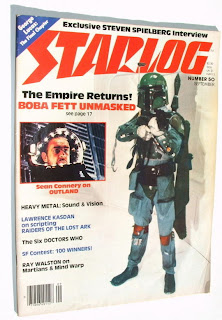 As someone who talks and writes about movies for a living, I'd like to be able to tell you that my first film magazine was Film Quarterly, or Film Comment, or Cahiers du Cinema-- something that would make me sound really cool and smart and hip, something that would allow you to picture the eight-year old Brian moodily smoking Gauloises and cursing the journal's jejune take on mise-en-scene.

I was eight, and I saw the magazine's cover, with a photo of Boba Fett pointing his gun at the camera. The headline screamed, "Boba Fett Unmasked!" Well, naturally I had to have it-- I didn't know how this magazine I'd never heard of had gotten such an interstellar scoop, but what kind of respectable sci-fi nerd could pass up something like that? Not me!

Of course, I soon found out the "unmasking" was an interview with Jeremy Bulloch, the actor who played Fett (and the smiling, sweatered man in the accompanying photo certainly didn't look like a rogue bounty hunter). Part of me was disappointed, but another part was intrigued: in addition to the Bulloch interview, the magazine also included a multi-part interview with Steven Spielberg and George Lucas on the set of Raiders of the Lost Ark (which had promising tidbits about the then-upcoming Revenge of the Jedi), an article about a movie I'd never heard of called Outland, and a piece on a British show, Dr. Who, that I knew only from the terrifying images of Tom Baker's 'fro that followed my daily viewings of 3-2-1 Contact on PBS. I knew movies weren't real, of course (despite my still-unquenched desire to glimpse beneath the "real" Fett's helmet), but I'd never really thought about the people who made them. Here was a magazine that peeked behind the scenes of my favorite genres-- science fiction and fantasy-- and let me learn about the actors, directors, writers, and special effects people that created all that magic.

I was hooked, and I started getting Starlog off the newsstands as regularly as I could. Pretty soon, I had a subscription that I kept until I was fifteen or so. It was from reading Starlog that I learned about Star Trek (the magazine had begun as a Trek fanzine), The Prisoner, The Outer Limits and The Twilight Zone, as well as the contemporary blockbusters I'd already been devouring. And without the magazine's well-researched histories, I never would've been spurred to investigate the sci-fi and mystery serials from the 30s, 40s and 50s (like Flash Gordon and Charlie Chan) that the magazine devoted a surprising amount of attention to (how many other mainstream popular magazines of the day took such loving care with Hollywood's pulpy past, at least in 1985?).

And it wasn't just films and TV: I learned about science fiction literature from reading Starlog. Without the magazine's admirable devotion to books as well as visual texts, I never would've read Harlan Ellison, David Gerrold, Isaac Asimov, Arthur C. Clarke, Ian Fleming, Stephen King, and so many of the other authors who made adolescence a lot more bearable. I'll never forget the shock of encountering Harlan Ellison's Starlog interview in 1985, around the time he was working as a consultant on the Twilight Zone revival. I didn't know what to make of this man who dissed several of my favorite movies, yet spoke with such a funny, engaged, passionate voice that I couldn't help but want to pick up one of his books and read more. And so I found Shatterday at our local bookstore, which led to another of his collections, Stalking The Nightmare, which led to Ellison Wonderland, which led to his absolutely brilliant collection of journalistic pieces/essays, An Edge In My Voice; that last book (which feels like a blog 20 years before the term) has almost nothing to do with science fiction (except for some reviews of science fiction and fantasy films that are interspersed among really funny restaurant reviews, defenses of Ed Asner, attacks on censorship, and critiques of Ronald Reagan), but it's easily my favorite Ellison book, and I never would've been spurred to find it if Starlog hadn't given him a forum.

It was that kind of magazine-- smart, diverse in its interests and passionate in its coverage. It wasn't afraid to wear its fandom on its sleeve, but that wonderfully geeky advocacy of the genre didn't compromise its professionalism: it was almost always a well-written, tightly edited and beautifully laid-out thing. From Kerry O'Quinn's optimistic editorials at the front of the magazine to Howard Zimmerman's wry commentaries at the back, Starlog was devoted to exploring a vast range of science fiction and fantasy-related texts, giving fandom a coherent voice and encouraging its readership to see life as a similar adventure into the unknown.

By the time I reached high school, my interest in science fiction and comic books was waning (it would take me a few years before I was mature enough to enjoy them again). I was tired of reading about Star Trek: The Next Generation in every issue, and I let my Starlog subscription lapse. Ironically, it was a quote in Starlog that caused my fandom to taper off: they were interviewing John Cleese (I can't remember why), and when asked why he wasn't a big science fiction fan, he said something like, "I've always felt that life on earth was so interesting and mysterious that there was no need to explore outer space." That resonated with me when I was fourteen, and it was the more earth-bound mysteries of life that I wanted to explore in 1987. I would occasionally see issues at the bookstore, and maybe flip through one if the cover caught my eye, but even after I returned to the escapism of comics and science fiction, I wouldn't really return to reading Starlog.

So, it was with a slight sense of sadness that I read, via Mark Evanier's blog, that Starlog was ceasing publication, at least as a paper magazine. It will continue on as a web publication, but I share Evanier's pessimism about that venture, especially in an Internet universe where there are so many other news options for science fiction fans, and where blogs and other websites provide those fans with a more immediate and personal voice. I do hope that Starlog continues on in one form or another, and that its writers and editors continue to have the opportunity to do the kind of interesting work for which the magazine was known. There's something to be said for the optimistic and open spirit that Starlog propogated, and for the way it encouraged a generation of readers to reach for the stars.
Labels: blockbusters Blogging childhood General Geekery George Lucas Media memory movies Writing

abbey b. said…
What a shame! I started reading Starlog at a year younger than you were when you stopped subscribing, when, like you, I saw my personal fave fandom on the cover--in my case, Star Trek: TNG. I'm not tremendously surprised by this move, but it's a shame nonetheless.
April 11, 2009 at 2:32 AM

Brian Doan said…
Well, if it had been the later, better seasons of TNG, I probably wouldn't have minded so much, but this was during the first season, and there are only so many times you can see Tasha Yar or Wesley Crusher on the cover. (:

Yeah, I was a bit surprised, but when I thought about it, I wasn't surprised the circulation had dropped, especially in this economy. It's still too bad, though, I agree.
April 11, 2009 at 3:52 PM

jzipperer said…
Yes, I started reading Harlan Ellison because Starlog columnist David Gerrold quoted him in the first paragraph of his column inthe first Starlog I ever read (#34 in 1980).

BTW, if you liked An Edge in My Voice (which started as Ellison's column in the short-lived Starlog sister magazine Future Life), you should definitely track down his books of late '60s, early 70s television criticism: The Glass Teat and The Other Glass Teat. Great stuff.
April 11, 2009 at 6:07 PM

Brian Doan said…
John,
I've read parts of the Glass Teat books, but should really read the whole collection. I love Ellison's fiction, but think he's at his best in essay form (I also really like his book introductions).

I like your website! I found it last night when searching for articles about Starlog's demise, and really enjoyed it. Thanks for stopping by!
April 11, 2009 at 6:10 PM

Bob Westal said…
Ellison's essays were always great fun to read -- unless you're personal ox was being gored. I have very fond memories of his intros in the "Dangerous Visions" books.

On the other hand, I never read "Starlog." Not sure why, other than that I was never that huge a Trekkie or super-"Star Wars" fan, per se, and the occasonal snide remark about it from some of my geek friends.
April 11, 2009 at 10:09 PM