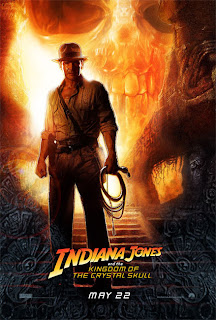 Indiana Jones and the Kingdom of the Crystal Skull is a delight, a wildly entertaining whirl-a-gig of a movie whose endless invention and abiding good humor returns the joy to the Indy franchise after the lifeless pandering and self-consciousness of 1989's The Last Crusade. The film is full of references to earlier moments in the series, as well as other films and pop cultural touchstones like The Wild One, Vertigo, American Graffiti and Howdy Doody; the friend I saw it with was sure he even spotted Back To The Future in the mix. But rather than feeling like a film geek's encyclopedia, Steven Spielberg weaves the quotations and pastiches in with a cinephile's sure hand, and an almost garish movie love (at one point, Cate Blanchett struts across the blacktop of a military base with her sword dangling from her belt, and the sky behind her seems to shift into a ripe purple, even though it's daytime: you know then, with a contented sigh, that you're in good hands).

Spielberg knows that we know that he's doing this, and more-- that we know that he knows that we know that he's doing this. That sentence is only slightly more complex than the dazzling stunts that litter the movie, and as I watched it all unfold on the screen in front of me (it's a must for a big screen), I found myself laughing, shaking my head and then laughing again: the movie welcomes this kind of emotional complicity, counts on your catching the jokes and the go-for-broke spirit, and rewards you by offering a spatial, emotional and narrative generosity that's rare in this age of the hipster blockbuster; the stunts, the references, and even John Williams' boisterous score are all designed to draw you in rather than shut you out, to connect you to the characters on the screen, rather than provide smug distance. At a movie-going time when "aren't you having FUN?" sometimes feels like a threat, an empty promise or a group-think coercion, Spielberg and co-conspirators George Lucas and Harrison Ford seem to genuinely want to know, and to make sure that a good time is had by all.

I have to admit, this is all something of a surprise: the previews looked a little dodgy and desperate, I was suspicious of adding Shia LaBoeuf to the mix (which is nothing against Mr. LaBoeuf, an actor I almost always enjoy-- it just felt a little bit too "Cousin Oliver" for my taste), and the reviews had been decidedly mixed. Was the 19-year layoff too long, I thought? Would the film just be a sad little exercise in nostalgia, the action movie equivalent of that other summer exercise in nostalgia, just as narrowly focused and just as desperate as Carrie to keep it up? 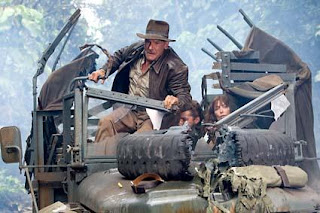 The film's opening shot-- a transition from the Paramount logo's mountain to a molehill in the desert-- seemed like a deliberate joke about deflating expectations. That's pretty cute, and the jalopy-military caravan drag race that followed was well-cut by editor Michael Kahn, but it was the pullback that ended the scene that convinced me everything would work: one of those great crane shots Spielberg is so handy with, as the camera moves to a long view of the desert afternoon, and the Elvis on the soundtrack fades into static, then silence. It felt like a sonic portent, eerie and funny and mysterious, and when, following that, they dragged Harrison Ford and Ray Winstone out of the back of the fifties automobile and threw him into the visage of Blanchett, I was pretty sure we were off to the races. 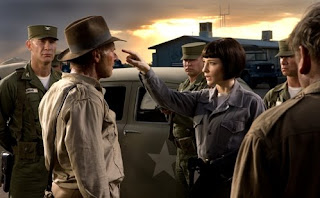 The movie is full of countless grace notes: a tight close-up on Blanchett's villain as she turns her bobbed head in anger against a delirious back projection; sweet nods to Sean Connery and the late Denholm Elliot; LaBoeuf ever-so-politely protecting his crotch from oncoming tree traffic while straddling two cars in a jungle; the THX, you-are-there roar of the first, then the second, then the third waterfall; the wind blowing Indy's hat up a church aisle and into his hands. Cinematographer Janusz Kaminski can't quite recapture the pop of Douglas Slocombe's original work on Raiders, but his touch here is much lighter and more graceful than in many of his other collaborations with Spielberg: the cinephiliac moments are given space to breathe without slowing down the considerable action.

The film knows it has to address the time gap, and Ford's aging action persona, and it does so with a great deal of grace and wit. Having seen the film, I have no idea what David Denby's referring to in his review when he notes of Ford's performance, " He’s in great shape physically, but he doesn’t seem happy. He’s tense and glaring, and he speaks his lines with more emphasis than is necessary, like a drunk who wants to appear sober... his hostile unease in some of the dialogue passages is a real killjoy." (Someone-- James Wolcott, maybe?-- once referred to Denby as the bright kid who's afraid to admit that he likes something as "declasse" as the movies, and I think the struggle-to-be-prudishness of that passage is a quintessential example). 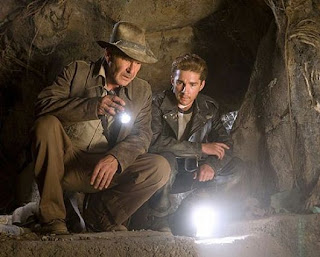 In fact, none of what Denby says above registers on the screen: Ford is more relaxed, and having more fun than he has at any time since Air Force One. Where he's seemed embarrassed and cranky in nearly everything from romcoms to action thrillers in the past decade, here he light, bemused, and seemingly relieved to finally be playing his age. "Damn, thought that was closer!," Indiana Jones mutters after one of his whip tricks doesn't work, but Ford says it with an "oh, what the hell" twinkle in his eye, that "let's just try this and see what happens" spirit that's always been at the heart of the Jones persona. He moves extremely well, but the film doesn't shy away from making his stunts slower, a bit more awkward and achy, and from letting LaBoeuf carry some of the action load. Denby is right about one thing-- in a way, Ford has the Sean Connery role this time around, but he carries it off with panache, underplaying the jokes, finding the right note of middle-aged regret in his scenes with Karen Allen and Winstone, and delighting in bouncing off of so many talented co-stars. 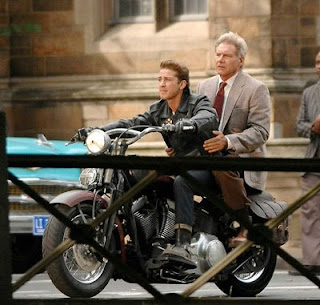 This is the tightest ensemble since the first film in the series: where Ford had to virtually carry the dark timbre of Temple of Doom on his own, and Last Crusade was a buddy picture, Crystal Skull is much more of a group effort, and the whole film benefits as a result. LaBeouf's role is underwritten-- it starts strong and ends well, but you get the sense some heart-to-hearts with Indy in the middle were left somewhere in a previous script draft--but he takes all the thankless 50s greaser references that George Lucas apparently insisted on and grounds them in real feeling: he's convincing in the dramatic scenes, has expert comic timing, and is surprisingly adept with a rapier. In far smaller roles, Ray Winstone and John Hurt sketch out their stereotypes of Limey grifter and crazed professor with expert hands, making the most of their on-screen time and stealing a few laughs with just a twist of the eyeball or cock of the head.

I have to agree with Larry (I'd link to the specific post, but it's as lost to the ether as one of Indy's artifacts): it's wonderfully good fun to see Karen Allen again. As Indy says to her Marion Ravenwood in the back of a Soviet truck, "There were other [women]...But none of them was you." 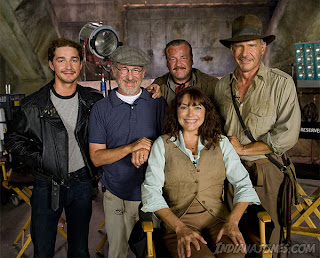 Marion was always Indy's best sparring partner, and from the minute she appears on screen, she increases the cinephiliac joy about 50%. Her smile is bright and dorky, her slight overbite seems to be connected to her eyes-- they both light up at the same time-- and the character's fearless spirit and wry sense of humor makes her a great change from the screaming ditz (Kate Capshaw) and shallow femme fatale (Alison Doody) that talented actresses were stuck with in the intervening Jones films (only Allen could watch cinematic son LaBoeuf sword-fight with a Soviet agent while stradled between two fast-moving cars in a crowded Peruvian jungle, and still sell the humor within the motherly concerns of lines like, "Disengage!...Engage now!...Disengage!"). "Same old, same old," Indy mutters about Marion's constant kidnapping by the enemy, but you can tell he's as glad to see her as we are, and that Ford is overjoyed to be playing with someone at least a little closer to his own age. When I caught the gleam in Allen's eye as the car she's driving careens off a cliff-- "Bring it on!," the eyes seem to be saying-- I felt the same way.

In the end, though, these movies are really only as good as their villains. Raiders is the most successful of the four because Paul Freeman's Belloq is such a wonderful doppelganger for the hero-- the stakes seemed so much higher, the interactions more grounded, and it was all enhanced by Freeman's expert intermingling of underplayed wit and melodramatic fervor. If Col.-Dr. Irina Spalko doesn't reach quite those heights (as my friend noted, she doesn't get the heart-to-heart with Indy that Belloq did in that bar), she's still the best sparring partner Jones has had in 25 years, and that's all due to Blanchett. 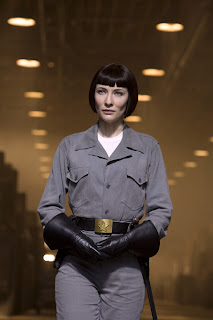 Decked out in military coveralls and tunics and sporting a shiny Louise Brooks bob, she's having more gleeful fun than anyone else on-screen, and carrying on a long and honorable tradition of Anglo-Australian actors playing Continental baddies. Given the film's delightfully sophisticated plays with pulp, does it really matter if her accent occasionally slips from "Ukranian" (by way of Boris & Natasha) back to Blanchett's native Austrailian? On the ride home, my friend asked, "So why does she carry the sword?," and my answer was almost instantaneous-- "I don't care why" (to which my friend nodded his assent). At a certain point (for me, anyway) real-life logic in these matters gives way to cinematic logic, and if having an omnipresent sword in her belt means she gets to unsheath it with a twinkle in her eye and transform herself into Errol Flynn, then so be it.

Blanchett is a fiercely charismatic actress, of course, and so it makes sense that the film's cinephilia would coalesce around her character-- she gets many of the good lines, the great walks, the dazzling framings. And in the end, for all Irina's villainy, she's theoretically the audience's surrogate: entering the temple of the alien gods (don't ask), her eyes are full of wonder, and she chides Indy's caution like a viewer who's just seen the apologetic Last Crusade: "Belief, Dr. Jones, is a gift you have yet to receive. My sympathies." In the end, Irina's chiding joke is the film's mission statement: are you willing to leap off the cliff with the filmmakers or not? 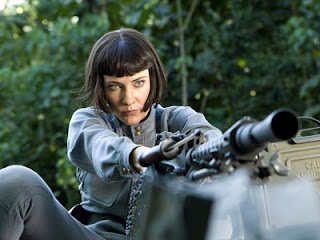 Crystal Skull's gift-- for both filmmakers and audience alike-- is to restore that belief, and to renew the code of cinephilia that Irina speaks like a mantra in the film's climax: "I want to know...to know everything."
Labels: blockbusters cinephilia film criticism George Lucas Indiana Jones movies Steven Spielberg