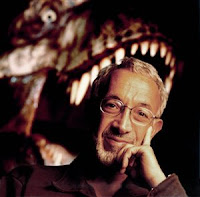 Special effects/makeup genius Stan Winston died of cancer today at the age of 62. One of only two special effects artists to have a star on the Hollywood Walk of Fame, Winston worked on some of the best-known science fiction and fantasy films of the last twenty-five years, including Jurassic Park, Aliens, Terminators 2 & 3, Edward Scissorhands, and A.I.. His most recent work was in Iron Man (he created the various armors) and its huge critical and box office success must have been particularly gratifying. His translations of the comic book's imagery were brilliant, and in Robert Downey, Jr., he had the perfect surrogate for his designs: both men shared an interest in detailed craftwork, quirkiness, risk-taking and surprise.

Born in Richmond, VA, Winston came to Hollywood to try his luck as an actor, and worked for several years as a stand-up comedian before starting as an apprentice in the makeup department of Walt Disney Studios. That affinity for performance and comedy explains why the special effects in another of his films, Galaxy Quest, are pitched so perfectly between gee-whiz techno-geekiness and affectionate parody: no matter the scope of the picture he worked on, he always made the fantastic and improbable seem both possible and very human. R.I.P., Stan Winston.
Labels: blockbusters Iron Man Obits special effects Stan Winston Steven Spielberg