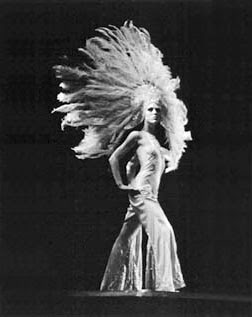 I don't have nearly the knowledge of contemporary theater that blogger Josh R. does over at Edward Copeland On Film: if you want a good sense of what you should be cheering for as this year's Tony Awards wrap up on CBS, please go read his excellent review of the season/set of predictions.

But as Lily Tomlin did a wonderfully hilarious introduction to the Xanadu performance (she's both gently mocking and genuinely loves it, and her pause in her plot description when she mentioned "It's about an angel who descends to earth to help her love open a roller disco" was priceless) and as the producers of South Pacific graciously accepted the award for best revival of a play, I realized that I was now at the same point I am with the Oscars: I almost care more about the revivals, career tributes and lifetime achievement awards than I do the newer, nominated shows.

Does this make me less a theater fan than a fan of theater history? A guy born out of time? Or is it a question of physical proximity (movies open everywhere, not just in one big city) and the cheaper costs of renting or going to a movie as compared to a musical play? I loved the number they showed from In The Heights, and Tomlin is right: Xanadu looks like a hoot. But neither of those numbers had the same impact on me as the "Move On" number from Sunday In The Park With George, or the medley of numbers from South Pacific, or Patti LaPone's typically lyric-chewing rendition of "Everything's Coming Up Roses" from the Gypsy revival (is there any vowel or consonant that LaPone won't bite off, masticate, then spit across an auditorium?). This year, the musical revivals seem to be where it's at (the shockingly atonal number from Grease aside).

At the center of all of this, of course, is Stephen Sondheim-- he wrote the score for George, the lyrics for Gypsy, and can count South Pacific lyricist/librettist Oscar Hammerstein II as his mentor (the Pacific revival was also produced by Andre Bishop, who shepherded the original production of George to Broadway in 1984). He received a lifetime achievement award tonight, and while he did not attend, his speech (read by Mandy Patinkin) was the best thing I heard on the stage all night: funny, teasing towards his old compatriot Hal Prince, and full of immensely generous and moving words about the librettists with whom he'd collaborated. Fifty-one years after West Side Story debuted on Broadway, Sondheim remains not only the towering figure in American musical theater, but the Tony Awards' most alluring and elusive ghost.
Labels: Awards Edward Copeland Musicals Stephen Sondheim Theater TV