According to this Times headline (via Reuters), The Incredible Hulk "smashed" the box office this weekend, taking in $54.5 million. "A bigger, better 'Incredible Hulk' crushd the North American weekend box office," it writes. Later, it notes, "Marvel and Universal brought the first 'Hulk' to theaters in 2003, but that more introspective film failed to follow through on its muscular debut after disappointing comic book fans.

I haven't seen The Incredible Hulk yet: despite my abiding love for superheroes, I always found the Hulk to be immensely boring. His 70s TV show (where he'd only be the Hulk for a few minutes at a time) was a drag for a little kid, as was his cartoon program (paired with Spider-Man and His Amazing Friends) in the mid-80s, and even on the comic book page he's always struck me as a single entendre concept: how long can you drag the Jeckyll-and-Hyde concept out before "Hulk Smash!" becomes "Hulk Snooze!"?

I did like Ang Lee's much-maligned version, though, precisely because it tried to do something new. Its use of split-screens in the style of comic book pages; its more character-driven, loopy visions of the book's various relationship triangles; and the sense that the whole thing felt like a fever dream inside the title character's head; all of this made the Hulk fascinating and accessible to me in a way that earlier iterations of the character hadn't. Lee's passion and imagination had done what I thought impossible-- translating and transforming a one-note character into a live-action space and making him gripping. That it "failed" at the box office was incidental, and the concern about that especially ironic, given that it came from hipster fans and critics who would normally obsess about an actor/writer/director "selling out," or somesuch rhetorical silliness.

But here's the tricky thing about the Reuters-approved storyline (one supported by other media outlets): however good the new film is (and I'm willing to give Edward Norton the benefit of the doubt, despite the reports that he might be a little unhappy with the final film), it actually made less money in its opening weekend than Lee's supposedly hated version. The 2003 Hulk took in $62.1 million to the new film's $54.5, a difference which becomes even greater when you adjust for the inflation of movie ticket costs in the intervening five years. It made considerably less than Iron Man ($98 million in its opening weekend), and even less than the mediocre Fantastic Four sequel ($58 million) did in the same weekend slot last year. And The Incredible Hulk was massively hyped, not only in theatrical previews, but all over the back covers of comics, the pages of glossy magazines, and the broadcasts and website of the Sci-Fi Channel, whose constant and vociferous coverage almost made them feel like a silent partner in the project. There was good buzz and bad buzz, but it was certainly a film that got a lot of media benefit of the doubt.

Which somehow reminds me of this guy. 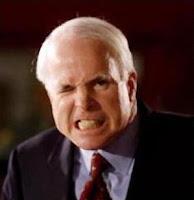 I don't doubt that if you got John McCain angry enough (made fun of his hair, for instance) that he'd turn into a raging green behemoth. But what really links the two is the media's insistence on sticking to pre-approved stories: the new Hulk is "cooler" than the old, people like it more, it's just, it's just...better. And all the box office/polling data be damned, that's the story we're sticking to. It makes imagining new stories a lot harder when all the coverage wants is "McCain Smash!" (he is, after all, our "Master and Commander").

Anonymous said…
Great post on the New Hulk, and I too have been somewhat slow to head to the theater to see this one. I think I'm also looking ahead to the next Batman film, which looks great.
June 16, 2008 at 10:07 AM

Brian Doan said…
Thanks! Yeah, I'll see the Hulk eventually, but he just doesn't grab me like other heroes. I am very much looking forward to the new Batman film, though.
June 17, 2008 at 12:01 AM