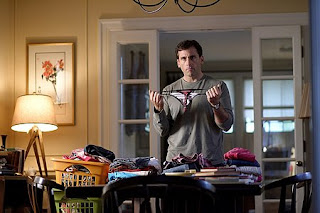 Dan In Real Life is full of mumbled lines, whispered lines, lines in sotto voice and lines that feel half-spoken/half-swallowed; its verbal softness is matched by a Sondre Leche score whose gentle folk-jazz pop rhythms wouldn't feel out of place at a Pottery Barn, or in a very swingin' elevator. It's a movie designed to soothe, to quietly distract, to unobstrusively announce its presence like a shy relative at a family Thanksgiving. The whole thing is so matter-of-fact and unforced in its rhythms that you almost feel like you've eavesdropped on a private conversation. Whether you want to overhear this particular conversation is a more debatable point.

As it turns out, the film's stylistic gentleness is a neat trick, because its narrative is an emotionally messy one (we sometimes forget that shy people can be egomaniacs, too). The cast is so winning and cinematographer Lawrence Sher so good at using the landscapes to frame and comment on their diagreements that it's easy to forget how blankly narcissistic so many of the characters really are. The effect is both beguiling and unsettling: I liked a lot of Dan In Real Life, but couldn't help feeling like there was a darker movie screaming to break out of its sitcom framework of befuddled dad, family shenanigans and loved denied.

If you're going to make such an emotionally conflicted piece, it helps to have two leads who underplay both the saccharine and the melodrama. Steve Carrell's persona is essentially a good-natured one: he's the well-intended, easy-going guy who's quick with the wry line or big smile. That charm makes Carrell's career choices all the more interesting, since he often deploys those qualities in roles that are far knottier: Little Miss Sunshine's suicidal Proust scholar, The Daily Show's almost psychotically befuddled correspondent, and The Office's Michael Scott, whose combination of wounded pride, self-absorption and puppyish desire to please make him so much richer than one first expects. When Steve Martin received his Kennedy Center honor last year, Carrell was one of those paying tribute, and you can see a bit of Martin's buttoned-down madman in Carrell's work, but I also keep thinking of early Tom Hanks: the "everyman" who realizes the close relationship between charm and smarm, who tries to do good but suspects deep down (as a friend of mine said of Hanks while watching the Oscars a couple of years ago), "that it's really just all shit." In the title role of Dan, Carrell's smile is offset by a hawkish, peering nose and big eyes that can be both loving and wary: even in the sweeter moments, they dart and roll and glance around the room, creating a nervousness that belies the platitudes of the dialogue.

As the object of Carrell's desire, Juliette Binoche is a good match: like him, she is warm, smart, and full of understated nervousness. Watch them together in their first scene, a "meet-cute" at a seaside Rhode Island bookstore: she mistakes Carrell for a store clerk, and asks him for help finding a "funny" book. "But not ha-ha funny," she says, her hands gesticulating, her body seeming to vibrate with anxiety. 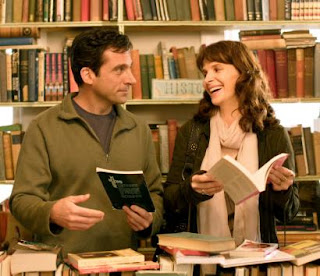 "And certainly not 'make fun of other people' funny," she continues, her litany of bibliophiliac desires pouring out of her like verbal diarrea, recalling Annie Hall's nervous first meeting with Alvy ("You say good game, and so right away I have to say good game..Oh, oh..God, Annie. Well...oh, well...la-de-da, la-de-da..."). She's more controlled, though-- unlike Diane Keaton's open-hearted Annie, Binoche's Marie guards her emotions, and part of Binoche's charm is how well she contains her character's feelings: they're far more interesting when the burble up from below. As Binoche unleashes her monologue, Carrell simply walks, and nods, occasionally "um-hmm"s: it's almost entirely responses, but he's a superb listener, and the economy of his movement-- low-key, graceful and unobstrusive-- nicely offsets Binoche's more hyper body. They balance each other beautifully, which is what makes the dialogue that follows-- and the romantic scenes that follow that-- all the more grounded and believeable. We know it's a plot point-- and so are the various complications that block their love for 90 minutes-- but it doesn't feel like one, but rather like an organic outgrowth of what's come before.

The rest of the cast isn't quite up to the level of the leads, but they're given a lot less with which to play. A surprisingly winning Dane Cook takes the thankless role of younger brother/romantic foil Mitch and makes him a genuinely nice guy, whose unknowing block of Dan's romance occurs alongside his desires to see the widowed Dan happy. Dan's three children are well-essayed by Allison Pill, Brittney Robertson and Marlene Lawston; that I wanted to see more of them suggests how good the movie is at avoiding or parodying various teen film cliches. It was nice to see the underused Jessica Hecht (who played Susan, lover of Ross's ex-wife, on Friends) in a tiny supporting role: she has a way of rolling a throwaway line off her lips and making it sound like a sarcastic bon mot. John Mahoney and Dianne Wiest have the trickiest roles as Dan's parents: they have to signify warmth and love and paternalism while also cluing in the audience that, deep down, they're pretty lousy parents: self-absorbed, boring cyphers who mean well, but never really connect with their kids in the ways they think they do. Utterly deadpan and full of perfectly fake smiles, these two veterans work beautifully as the film's emotional guideposts: funny, sweet, and kind of creepy, when you think about it.

Should we think about it? The movie ends with Dan, an advice columnist, speaking in voiceover about "expecting surprise." It's the kind of readymade, Hallmark card thesis statement that could sink the film, if so much of the film hadn't already explored and punctured its treacly sentiments with genuine curiosity and humor. Director Peter Hedges is a better director than writer-- his considerable skill with the actors and eye for the ironic, deep-focus tableau spins his occasionally cliched script in some funny directions-- and I wasn't always sure if he grasped the full selfishness of the folks he was putting on-screen. But in the end, Dan In Real Life is about tone more than plot, a reminder of the sometimes-lost pleasures of relaxed, unforced filmmaking, and the advantages of the quiet voice. 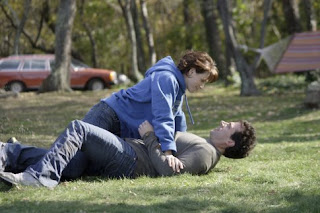 And if you don't like everything it has to say, well-- that's what you get for eavesdropping, after all.
Labels: film criticism movies Romantic Comedy The Office TV