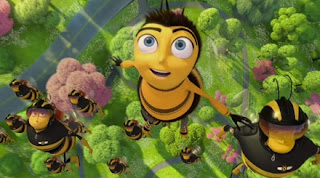 There's an appealing plasticity to the world of Bee Movie, a sense that the world is one giant toy: the cars the bees drive in the hive resemble Matchbox cars, which is only fitting, since the "roads" look like the old plastic "Hot Wheels" loop-de-loop tracks from the late '70s. The bees themselves look they're made of Lego pieces, and the shiny walls of the hive are a Lite Brite set come to life.

As I've been discussing with my students this semester, so much of CGI falls into what robotic theorists sometimes refer to as the "uncanny valley": the closer they strive to make the animated figures (especially humans) more "realistic," the eerier and less real they feel to us as entities. Early CGI, especially, suffered from this quality, but it's still fully on display in the Shrek films, whose animatronic-like humanoids act as a visual correlative to the films' unstable mix of intertextual snark and wet sentiment. The valley much non-Pixar CGI represents suffers from both a visual and narrative flatness, and an increasingly smug sense of Manifest Destiny: "we are the future of animation," even subpar efforts like Over the Hedge imply, and that certainty has led to a lot of lazy, confusing work (even the Pixar guys aren't entire immune, as Cars proved). "That's not animation," one of my students, a hand-drawn partisan, complained after class one day, and it's not if we think of animation not only as as technical medium but a state of mind, a leap of the imagination (Compared the the sleek dazzle and reach of Miyazaki, Shrek feels as original as Milton Berle).

Bee Movie is not the redemption of the form, not a great breakthrough in narrative or technical terms: it's just a very charming, warm-hearted, fairly low-key piece of work (stylistically, it's an ironic contrast to the manic hard sell of its omnipresent marketing campaign). In a way, though, that's what makes it so appealing: in giving up the ghost in terms of trying to make a "realistic" visual world, and in embracing its narrative inconsequentiality, it reminds us of the more lighthearted, fantasy-driven charms the medium is capable of.

Making much out of nothing-- celebrating the inconsequential-- is what made Bee Movie's star famous, of course, but I was taken with how well the Seinfeld persona translates into the realm of family film. His delivery is still funny, and especially when the character is perturbed, one can almost hear the echoes of "Hello, Newman." For the most part, though, the cynicism of the Seinfeld TV persona is absent here-- as opposed to TV Jerry, Bee Jerry really cares, and captures the sound of a young man (well, bee) going through life lessons and growing pains. Maybe it helps that Barry B. Benson's face is a smiling, shiny one instead of Seinfeld's patented withering glance, or maybe the child-driven genre trappings just brought out his sweeter side. It helps that he's surrounded by a talented cast-- Matthew Broderick, Rip Torn, Patrick "Puddy" Warburton, the irreplaceable John Goodman, and a game Renne Zellwegger-- who help to move the story along at a light, brisk pace. That story offers a slightly conflicted take on labor relations and lawsuits that seems timely in light of the current writers' strike. I'm not sure the movie knows exactly what its position on residuals and fair payment is, but its final moments of a balanced eco-system-- physically, economically, and emotionally-- are well-taken.

Is that too much weight to give a movie that includes funny cameos by Ray Liotta and Sting, and even gets some jabs in at CNN through a bee Larry King? Perhaps, but then the film itself suggests the key to a happy life is finding the proper proportioning of work and play, seriousness without self-seriousness. In offering its audience a bright plastic playground to fly through, it ends up saying more than a million intertextual jokes could: its lightness has weight.
Labels: Cartoons film criticism movies