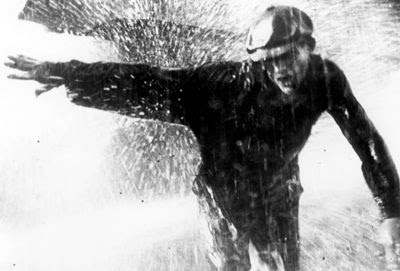 When Paromita Vohra came to present her film on Monday, some of the film faculty and cinema studies majors took her to dinner, and she asked what we thought about the WGA strike that started that day. I joked that it didn't bother me, as I already had stacks of movie and television DVDs to catch up on, and this actually gave me a breather.

That's a joke based in truth, but the larger truth is that I am fascinated by the WGA strike. I think part of it is my reflexive support for unions, especially in these very corporate times. I think the issues they're striking for in terms of payment for existing and emerging new media set an important precedent. It might also be because, as someone who teaches in film and media, the work of these folks is connected to my own, or because I recognize and admire the work of a lot of the names (Joss Whedon, Larry David, Brian K. Vaughn, Harlan Ellison, etc.) I see quoted in articles and blogs, so I feel more of a connection to it than with other labor actions.

But reading through and watching (via the dreaded Headline News, which was on in the background as I cleaned my apartment) (yes, that channel has gotten so bad that I do feel the need to justify and explain why it was on) some of the commentary on the strike, I began to think it might also be the canary in the coal mine for next year's elections. United Hollywood and Whedonesque, where Whedon has been doing more-or-less daily postings, cover some of the more egregious comments from the New York Times, Entertainment Weekly, and Variety, and I heard similar remarks on HN-- how the writers' strike would throw crewpeople out of work, extend to other media, etc.

Well, maybe it will (although I'm not sure how shutting down "Dr. Seuss's How the Grinch Stole Christmas-- The Musical" can be anything but an aesthetic benefit). And admittedly, Whedon and the strike captains running the "United" site write with a vested interest. But I was still struck by the language they noted in some of the coverage, particularly from the Times: “All the trappings of a union protest were there… …But instead of hard hats and work boots, those at the barricades wore arty glasses and fancy scarves.” Or this, from EW: “Labor disputes in Hollywood may not inspire the sort of tingly feelings of fraternal solidarity with the common man associated with, say, an uprising of mill workers. Some of the writer’s demands – keeping their names on movie posters, for instance – wouldn’t lure Norma Rae to a picket line."

As Bob Somerby notes on a daily, sometimes exhausting basis, this is precisely the kind of language these same media outlets use to describe any progressive group or cause: as "effete," "elitist," "hypocritical," or somehow "less American" than those big companies and manly-manly conservatives who want only to protect you and your interests. Oh, those silly writers...union organizers...Democrats...etc.! As Somerby documents, just zoom in on some trivial bit of appearance or misspoken moment, and that becomes the thing Matthews, Russert, et. al., will pound you with for the next six months.

In many ways, what the coverage suggests is precisely what the writers are striking about-- the power of large conglomerates to control the message (and the money) for their own benefit. I'm pretty far from a Marxist, particularly for people in my profession; I don't think, as some of my colleagues in graduate school sometimes suggested, that what we do is the same as what migrant farm workers do, and neither is what screen and television writers do. But it is labor, and should be treated as such, and when that labor involves words and images-- the basis of democratic exchange--how that gets spun feels important to me. It's not only about when The Office will be back on the air, or whether 24 might be postponed for a year (in an election year, no less! Where will the GOP candidates get their talking points now??), but about that rhetorical frame, or set of frames, that some of this coverage is attempting to build, one not unique to the writers' strike, and one I suspect we'll see again next year, when the stakes are much higher for everyone.
Labels: Anecdotes Joss Whedon Media Oberlin Politics TV writer's strike

Greg said…
from EW: “Labor disputes in Hollywood may not inspire the sort of tingly feelings of fraternal solidarity with the common man associated with, say, an uprising of mill workers. Some of the writer’s demands – keeping their names on movie posters, for instance – wouldn’t lure Norma Rae to a picket line." Blow it out your ass Entertainment Weekly, a magazine where I suspect true writers have never existed at all.

I used to be in AFTRA/SAG years ago. I dropped out because I simply wasn't pursuing acting on a regular basis and it seemed a waste to keep paying those damn dues. But here's what always bugged me about the media's depiction of strikes in the art's field: They always depict us as being crybabys asking for more millions in the bank and more gold laced liners for our diamond encrusted cigar boxes. I got tired of explaining to people when there was an actor's strike that it wasn't because Tom Cruise wanted ten million dollars more for his next movie. He negotiates his contract independently regardless of union scale. The strike was for all the struggling actors working 18 hour shifts on studio sets and locations and getting a few hundred (few thousand if you're lucky) bucks for their troubles. And let me tell you from being in the union, you've got to fill out the forms, get the signatures, send it in and even then, like an insurance company disputing a claim, your forms are scrutinized by the paying party to see if they can get out of paying you. And they will cheat you if they can.

The writers get residuals (a deferred payment against the lifetime value of a script) for their work. If the show's a flop (and 90% are) they don't get residuals so it's the upfront cost (around $20,000) for writing the script that makes up most of their income. Of the thousands of writers in Hollywood maybe less than a hundred get that $20,000 a year. And a $20,000 annual income is not much for anyone to get by on. So they rely on residuals from any media outlet presenting the shows they write for extra income and the studios want to say, "Well we just don't know enough about new forms of media yet to give you residuals for those. For now we'll just stick with syndication residuals. Now if you'll excuse me I have to go wipe my ass with this newly minted ten thousand dollar bill."

The writers want their fair share and the corporations making billions are fighting to keep every penny for themselves. I'm with the writers.

If by chance you've ever looked at my profile on my homepage at CinemaStyles you'd know where I stand anyway.

Brian Doan said…
Jonathan,
I am, too, and as a former Hollywood union member, you've articulated their case far better than I could. In talking about the larger rhetorical framework, I wasn't trying to diminish their specific issues, but just suggest that what they're doing might have broader ramifications even for those "why does Tom Cruise need to strike?" people you mentioned.

I linked the United Hollywood site on my blogroll, and I'd suggest going to that whedon fanpage, too-- I know you're not much of a tv watcher (or at least one of your comments suggested that awhile back), but whedon's been posting, and as a third generation tv writer, he's a very articulate and funny defender of the strike and historian of past WGA strikes, and even throws in lists of strike-related films and broadway musicals to watch and listen to.
November 10, 2007 at 9:20 PM

Brian Doan said…
" And let me tell you from being in the union, you've got to fill out the forms, get the signatures, send it in and even then, like an insurance company disputing a claim, your forms are scrutinized by the paying party to see if they can get out of paying you. And they will cheat you if they can. "

Meant to add that this reminded me of graduate student union experiences in grad school, where a reorg of the university's governing board forced our union to "relegitimate" themselves as a governing org, meaning we had to collect signatures from a certain number of grad students across the university's departments before the school would even recognize our negotiating authority. On the one hand, it was great to meet so many people in so many departments doing interesting work (I think in grad school you tend to get so tunnel-visioned in your own work that you don't always meet people outside of your own discipline or closely related ones); on the other hand, it meant a year or so of distraction from working towards important goals like health care.

I would also note that it's nice to see various fan groups organizing support for the striking writers by doing food and coffee runs, and also nice to see actors, directors and others supporting the writers and reminding hollywood that their work is, in fact, interconnected.

Finally, while I think EW's gone downhill in recent years (even though I will always like their film critic, Lisa Schwartzbaum), I will give this guy some credit for addressing the issues in a fairer manner.
November 11, 2007 at 9:21 PM