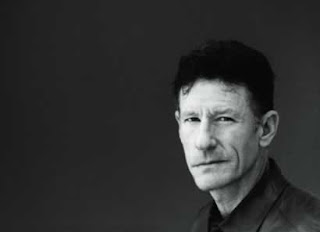 Musician, sometime actor, raconteur, and the best husband Julia Roberts will ever have-- tip your hat (but don't touch his) to Lyle Lovett, who turns 50 today.

I first encountered Lovett when he played the eerie Detective DeLongpre, the Freaks-quoting police investigator who haunts Tim Robbins' slimy movie executive in The Player. With his kinky pompadour and wonderfully beady eyes, he's a striking screen presence, somehow both menacing and oddly inviting, with his crinkly smile. After using him in The Player, Robert Altman would deploy those qualities to even greater effect in the following year's Short Cuts, casting Lovett as the embittered baker Andy Bitkower, who leaves harrassing phone calls on Andie McDowell's answering machine after she fails to pick up a birthday cake. Lovett's performance has to be carried by his voice, whose gravelly warmth gets turned inside out as Lovett spits menacing threats into the phone every few minutes. At the same time, when he finally connects with McDowell's character in the flesh, he makes the 180 emotional turn convincing-- again, that almost naive-looking face is able to register shock and regret without seeming sentimental or overblown.

Those qualities-- wit, menace, warmth, bemusement and confusion-- all power Lovett's best musical work. While nominally a country singer, he's really more in the tradition of Randy Newman-- a singer-songwriter who skips across generic boundaries, an aching romantic who uses cynical wordplay to guard a vulnerable heart. He's also an intensely cinematic writer, as best captured on The Road To Ensenada's "Her First Mistake." A shambling tale of hilariously bad pick-up lines, love hoped for-then lost-then found, the song allows Lovett to play with the cliched "baby baby" lines of romantic songs (or, as he sings with mock melodramatic force, "C'mON, Baaaby!!"), satirizing them while also acknowledging the genuine emotions they struggle to represent: "So there he sat, so all alone/Like a king who sits upon his throne/And whose kingdom may have just gone home/With another kingdom..." I saw him sing that line on Austin City Limits years ago, onstage in a summit with Willie Nelson, and I remember how heartily Nelson laughed at the line, and the clear pleasure Lovett took in making a hero laugh.

1. In the summer of 1996, I was living in Chicago, and walked into the Michigan Ave. Borders, where Lovett's Ensenda album seemed to be booming throughout the multi-leveled store. "Wow, good sound," I thought. I took the escalator to the second floor, and as that level came into view, I saw the blurred outlines of a band. It turned out it was not an album, but Lovett himself giving a free concert in the cafe in support of the record. It was the first time I'd really heard his music up-close, and appreciated its humor and breadth.

2. A college friend was pursuing an MFA in Austin, where her screenwriting teacher was Cookie's Fortune writer Anne Rapp. The movie was having a free screening in Austin, and as the lights went down, a man jostled by my friend, and knocked over her Coke. "Goddammit!," she said, grumbling to herself about how rude people could be in dark, crowded spaces. Suddenly, she heard a Texas twang: "Oh, excuse me." She looked up-- it turned out the dreaded Coke-spiller was Lyle Lovett, who nodded at her, then found his seat.

3. I had the pleasure of seeing Lovett with his "Large Band" in 1998 in Jacksonville, Florda, as he toured in support of Step Inside This House. It was a really good show, but what I mostly remember was his behavior after the first song, as he calmly tuned his guitar for several minutes, smiling as the audience grew more and more restless. Finally, he leaned into the mike, and said, "I do this because it amuses me."