To Sleep, Perchance to Blog... 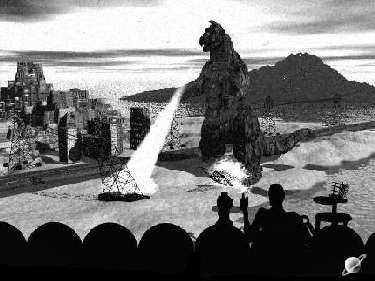 -- I have entered the world of MST3K. I don't just mean I'm watching the show, but that somehow I am on the "Satellite of Love" with the robots and MIke Nelson (odd, as Joel was always my favorite human sidekick). Somehow, Joss Whedon and an annoyingly snotty producer are always there, along with some faceless celebrities (is that an oxymoron? I know they're celebrities-- can sense it-- but can't identify who they are). Tom Servo, Crow and Mike are cracking jokes, and suddenly Whedon cracks one, too. The producer becomes irate, and declares that she won't continue the broadcast until Whedon, "this idiot rube from Minnesota," is removed from the set. This causes a mass walkout of many of the celebrities, and I give the producer a tongue-lashing. Why Minnesota (especially since Whedon's from California)? Ironically, MST3K itself started as a cable access show in the Twin Cities, and I spent four years there as a child. And what's wrong with guys from Minnesota, anyway?

--I'm at a party with a bunch of Beltway bigwigs, including Maureen Dowd and Chris Matthews. I know it's unpleasant, and no one (including me) seems to be having any fun. My memory recalls this as a dream in black-and-white, like a German Expressionist film, but, perhaps as a kindness (Chris Matthews?? As Summer Roberts might say, "Eww!"), it's repressed everything else about it; the dream exists as a palimpsest-- I know I had it, but can recall almost nothing about it.

--A family gathering. There are two versions of my uncle there, arguing with each other. I raise a question of theology, and my uncle gets outraged, and his two versions (two parts?), begin spittling vehemently. Clearly, I've been thinking about Miyazaki too much this week.
Labels: Dreaming Media Politics Random Oddness The OC TV

Anonymous said…
I found these comments left on the official MST3K forum:

I agree wholeheartedly with Cheepnis – THIS IS A PATHETIC EXCUSE ON MALLONS PART TO SIMPLY CASH IN VIA A WEAK AND "CHEESY FRONT-END TO LURE PEOPLE INTO THE STORE!"
UGH! PATHETIC! SIMPLY PATHETIC!

Before anyone thinks that I'm simply rooting for the "other "guys, let me just say that I also think Rifftrax SUCKS TOO! Here again is a prime example of MST3K has-beens "cashing in" or at least attempting to cash in on their MST3K past. The real problem with Rifftrax is that it lost sight of what MST3K was really all about – bad movies! Their formula is to simply riff any new DVD release because of so called "availability." MST3k was about riffing bad movies, not just DVDs that were about to come out and that it could link to and collect a fee every time some doofus clicked on the link to purchase the movie by clicking here.

Further, most of the movies were older movies and added to the campiness of the show. On rifftrax, they'll riff anything (good or bad) as long as there is a buck to be made! As for the synching of an mp3 track with a DVD – Oh please, I haven't got the time to splice a jillion things together for a couple of hours of entertainment (and not much at that.) Rifftrax also relies too heavily on crude potty humor or outright language (a real sign that the writers are simply not creative or talented enough to write actual riffs or humorous dialogue). Can't think of anything funny to say? Hey, let's talk about potty humor! That always gets a laugh from the unintelligent masses!

So, in a word, Rifftrax SUCKS too!

My only hope left is that Joel Hodgson (the real and only talent behind MST3K) will dazzle us once again with his talents. And with Trace and Frank and original company along for the ride, it does look good!

MST3K.COM and RIFFTRAX – GO TO HELL! (Or at least to Canada!)

- And it's really disheartening and shameful that all of these former friends and MST3K alumni can't stand each other! Just one more hope dashed in this world that people who should be able to get along and collaborate together to continue or *gasp* perhaps make something altogether new and comedic-ally brilliant simply CAN'T or WON'T! (Go to CANADA!!)

"-Paul especially didn't want to put up "Reel Livin'" first but it was the only one done and everyone figured that if we waited until really good ones came along,..then who knows when the site would launch. All the MST3K guys have a DIY "show the warts and all" mentality that made the show so great in the first place. So...we went ahead and threw up the site as is, that animation, and then a quick store to help pay for hosting and stuff."

- I have a feeling that Shad's comments were completely AUTHORIZED by none other than Jim Mallon. (If not posted by Jim Mallon himself.) What to do if your all new MST3K.com website sucks? Why just tell the loyal fans that you KNEW it sucked too, BUT that the good stuff is coming SOON and we just posted the CRAP first because IT'S ALL WE HAD. I mean, c'mon, if "we waited until really good ones came along,..then who knows when the site would launch." (Shad/Mallons words).

Well, we wouldn't want to wait until we actually had something "good," would we? Nah, let's just post any old crap on the ALL-NEW MST3K.com. After all, it's not like we are introducing a NEW MST3K WEBSITE or anything, right? Who cares, right? We don't, that's for sure. I'm sure the fans of MST3K don't actually have expectations of MST3K being funny or 'gasp' even good. Besides, if we wait until the good ones come along we might never launch the website (therein lies your problem, guys!) It might be weeks, months, years, before anyone around here at MST3K.com could post a "good" one. Nah, let's just post the crap we got.

Or as "BathTub" put it (you beat me to the punch…)

"Well putting up stuff you suspect to be below standards is going to be counter productive. It's not like there was a huge outside demand for a Nov 5th starting date. The time should have been taken to ensure that the first one was the best it could have been. First impressions count, especially in a situation like this where you have to overcome a lot of skepticism towards the project." – Credit to member "BathTub"

"Plus they have to be fairly easy to animate, Jim wants to keep the episodes coming despite no network $$."

Oh right, because he's dirt poor. I keep forgetting. It's not like he makes a ton of coin off the MST3K DVDs. In fact, isn't he about the ONLY ONE who makes money off the MST3K DVDs? (Seeing as how he screwed the rest of the cast – you know, the same rest of the cast who now loath him and who unanimously decided NOT to be involved in this all new MST3K money-making greedy venture (minus just about all of the MST3K)! Oh, that's right… silly me, they weren't ASKED to be a part of this new greedy venture. Maybe that's because Mr. Jim knew they would all collectively SPIT in his face!

Ah, isn't friendship Grand! The relationships that Jim cultivated throughout the years of MST3K with all of those PUNY and INSIGNIFICANT creators and contributors known as the cast and crew have really paid off. Why they're all back to support the MAN behind MST3K, right?

No? Hmm, well, maybe someone just forgot to mention to them that MST3K was back. I'm sure Jim will get someone on that right away – right after they get something "good" in the can and posted on the website. So Shad/Mallon, the reason you have NO NETWORK $$ is because you got NO NETWORK SHOW. I guess you missed that. What you do have is CRAP and quite frankly, CRAP IS CHEAP. (Tip: Don't spend a lot of money on your crap, Jim!)

Don't treat us fans as if we were stupid. Websites cost almost nothing these days ($1.99 and up for hosting). The only thing you have to pay for is for someone to animate your crappy little flash toons (and hopefully you're not paying much for that crap!) I'm sure your DVD sales (YES, THEY'RE ALL YOURS!!) will probably pay for that with plently left over! And that doesn't even include your all new MST3K.COM store sales which promote your ALL-NEW MST3K.COM crap!