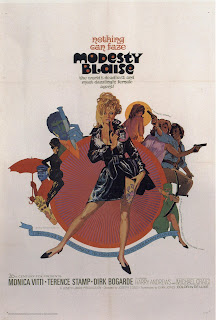 Joseph Losey's 1966 take on the comic strip character created by Peter O'Donnell and Jim Holdaway is a fascinating mess, veering from the visually astute (the striking credits sequence, shot as as a series of oblique angles on skyscraper architecture, almost a metacommentary on the intersections of modernism, art, and capital the film will try to traipse across) to the narratively tedious (I'm guessing Dirk Bogarde as a dandyish supervillain sounded funnier in the pitch than it is the execution) to the almost New Wavian (all of Modesty's hair flips, like Anna Karina playing superspy). It's all drenched in mod shimmer, but feels less like the playful teenaged joy of Richard Lester's Beatles films or the hipster ennui of Antonioni's Blow-Up or even the inverted, horrific Swinging London of Bunny Lake Is Missing than a clumsy, slightly embarrassing attempt at the hep by your dad, desperate to fit into the current fashions but just missing the mark (it might make a great double bill with the 1967 Casino Royale).

There is one moment of pure genius though, and that's the sudden musical scene that pops up 2/3 of the way into the film. It seems out-of-place, out-of-character (as much as the film develops any) and tonally off-- and yet there's such a devil-may-care chutzpah to the scene, and such a clear sense of fun radiating off Monica Vitti and Terrence Stamp, that it stands out amidst the awkward a la mode of the rest of the film. I wish the rest of Modesty Blaise had followed its blithe spirit.

Greg said…
I love Monica Vitti and Terence Stamp, don't get me wrong, but the real reason I'm commenting on this post is to ask - What? No post on the most bizarre "field goal to lead a team to overtime to win the game" finish in NFL history? I can't believe it.

And the Pats. We just barely squeaked out another victory. Seriously, up until the last 58 or 59 minutes of regulation it felt like it could go either way.
November 19, 2007 at 10:10 AM

Brian Doan said…
Hadn't seen the game yesterday, and didn't know of its bizarre outcome until after posting. Pretty cool, though-- it's always good to beat the hated ravens, and to do so in a way that also leaves them emotionally distraught and confused...well, that's just icing on the cake.