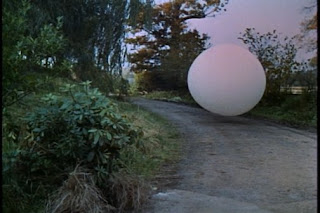 It's documentary week in Cineville! Tonight, the college hosted two more filmmakers, Julia Meltzer and David Thorne, who work under the banner name of "The Speculative Archive". According to the description on their website

Los Angeles-based artists Julia Meltzer and David Thorne produce videos, photographs, installations, and published texts. From 1999 to 2003, their projects centered on state secrecy and the production of the past. Current works address the use of documents—images, texts, objects, bodies, and physical structures—to project and claim visions of the future.

Tonight, they brought two fascinating films, It’s not my memory of it: three recollected documents and We will live to see these things, or, five pictures of what may come to pass. As the titles suggest, both films play with questions of knowledge, information and memory--how we know what we think we know, and the various political, cultural and formal filters that knowledge comes through. It's not my memory... was really striking, combining a Godardian use of textual play (words and letters appearing and disappearing in relation to voiceover) with interviews we only hear-- the film eliminates the "talking heads" format popular in mainstream documentary, perhaps as a way of reflecting the secrecy of the subject matter: how intelligence agencies gather and manipulate data for various military and political purposes. In the most striking segment of the film, we see torn pages-- like pieces of a coded, ripped-up communique-- float and rip off the screen, combining and recombining to form words and names that change as a voice tells his tale of being an intelligence source. It looks a bit like the credits sequence to Bunny Lake Is Missing, but the narration makes it feel like something out of John Le Carre-- dark, mysterious and morbidly humorous (at one point, the voice says, "They gave me an alias I never used. Have you ever heard of an Iranian named 'Rafferty'?"). It's when the film is floating and instable that it best reflects its subjects' paranoia and distrust-- it really puts us inside their heads.

We will live to see... is more of a mixed bag. It is actually five short films of varying lengths, linked together with numbered intertitles that are by turns poetic, poiltical, messianic and didactic. It was shot in 2005-06 in Damascus, Syria, and explores the dreams, hopes and fears of its subjects following both 9/11 and U.S. intervention in the region, and the assasination of the country's leader. The structure of the film-- alllowing for a variety of stories and modes of address-- is a wonderful idea, but as with any segmented film, some of the sections are more successful-- to me, anyway, and after all, this is a film about private desires made public-- than others. Like It's not my memory..., We will live to see... is most successful when it's more free-flowing and poetic, when it allows its instabilities and ambiguities to really come to the fore.

They do so most brilliantly in the first segment, a series of anecdotes centered on an unfinished urban development project in downtown Damascus. Structured around a voiceover that tells us about architectural planning competitions and constantly shifting expectations and needs-- It will be a mosque! No, a shopping center! No, a mosque and a shopping center! --the segment offers a Borgesian hallucination of good intentions devoured by ambition, confusion, absurdity and entropy. The building, of course, is never finished, and the segment's final image-- that of a building slowly sinking in the sand-- is a wonderful symbol that lingers across the other segments of the film. I also really liked the interview-- sad, funny, and defiant-- with the Syrian dissident who spoke of the importance of maintaining individuality and imagination in the midst of repression. Both of these segments were more interesting to me than an opaque segment about leadership centered around equistrian showmanship, or the rather heavy-handed closing segment about "freedom" and capitalism.

"We did that because...", Thorne said in response to a question about It's not my memory, pausing to think of an answer. I think that pause, that ellipsis, is really important for the Speculative Archive's aesthetic, at least as represented by these two films. They seem interested in what happens in the space between words, in trying to represent absences and uncertainties and gaps; like Miles Davis, they know that what's not played is as important as what is, and that those gaps can create moods that are by turns beautiful, funny and deeply sinister. Is this a modal mode of documentary?
Labels: memory Miles Davis movies Oberlin Pedagogy