Tonight, the college hosted filmmaker Paromita Vohra, and held a screening of her film Q2P. She is an Indian filmmaker who works primarily in the documentary form (although she does have one fictional short film, A Short Film About Timei), and often explores issues of space and urbanity in relationship to questions of gender and nationalism. As Q2P's playful title suggests, this new film is a continuation of those interests, in this case focusing on public toilets in India as a way of discussing gendered space and urban planning (or lack thereof). In her Q&A after the screening, the very personable Vohra talked about how she's interested in thinking about social issues, but has no desire to make boring polemics or to knock people over the head with a message. She also wanted to avoid making a film that was all toilet jokes or nudge-nudge humor (although parts of the film are intentionally very funny). In discussing the film's DJ-designed, electronica-like soundtrack, she spoke of "finding the note" as a means of organization-- what is your structural or musical throughline, and how can you make a space for your subjects and your audience to move through? I liked the film, which juggles interviews, essay-film style voiceover, and animation. There are many striking shots of buildings, public rest areas, often focusing on the texts-- official, graffiti, posters-- that surround and defines such spaces. 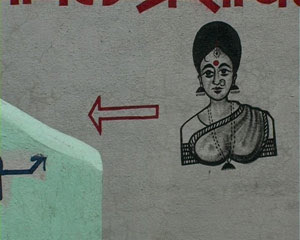 There are a number of good interviews-- I especially liked the curator of the toilet museum, and the two women bathing an infant in toilet water at the end (Vohra described the scene as droll, but I found it more blackly comic, and appropriately bleak)--and her use of animation puts a nice spin on how cartoons are used in PSAs and industrial films, but I think the most effective element of the film is the soundtrack. She used a DJ, she said, because she didn't want the music to be upbeat or mournful, but somewhat less predictable in relation to the image. She said she gave the DJ a scratch track of a song from Miles Davis' Bitches Brew, and asked for a similar sound, and the music really does work well in conjunction with the visuals-- it complicates our relationship to them, doesn't determine our emotional response, and also acts as another layer of critical possibility. DJs, after all, are already doing with music what Vohra is searching for in the film's exploration of stratified gender roles, what she hopes to see happen in Indian social life: taking the already familiar, the already categorized, and literally going against the grain , rearranging a known song into something startlingly different.
Labels: Jazz Miles Davis movies Oberlin Pop Music Re-mixes

Greg said…
I've noticed that most low-budget documentaries today (and fiction films too for that matter) look exceptionally well today. With such amazing advances in technology even a bottom feeding amateur can make a reasonably professional looking film.

I also noticed that when I was watching The God Who Wasn't There, another low-budget doc, the score was all electronica. Other low-budget docs I've seen in the last year use it too. Now, I never thought I'd hear myself say this, but in every case I've seen it it worked perfectly. There's something about the redundancies in the melodic lines that lends itself to perfect visual accompaniment.

Another similarity I've noticed is the use of animation throughout. All the docs with electronica had that in common too. Documentaries are really moving beyond their staid educational reputation (an unfair reputation it should be noted) and will someday soon I hope compete regularly with narrative film (and I mean on a consistent basis, not once or twice a year with things like Sicko or March of the Penguins).

I'd love to give credit for all of this to some groundbreaking documentarian (and I'm sure many would cite Errol Morris first and foremost) but really I think it's the History, Discovery and Learning Channels that really started to propel the "documentary as entertainment" onto the masses. I've got kids with wild (and endlessly annoying) teenage tastes. They see movies and watch tv shows that make my head and stomach hurt and act and dress in ways that are so unintentionally funny that I CANNOT WAIT to show them how utterly uncool they look in ten years. But teenage / middleage gap aside, one thing they and their friends will watch for entertainment (in between the crap) is docs on cable. Hell, even MTV and VH1 mainly show docs of some form these days. They may not be the best in the world but they are docs.

It was the cable explosion of channels in the nineties that started the documentary boom. They needed shows so they started putting together little mini-docs (Modern Marvels, Behind the Music, Medical Detectives, Seconds from Disaster, Naked Science, etc.) and people loved them because they were entertained and intrigued and could reasonably claim that they learned something as well.

Sorry for such a long comment but I love documentaries, am jealous you got to go to a hosted doc and am excited for future of the form.
November 6, 2007 at 10:03 AM

Anonymous said…
This filmmaker sounds really interesting, cinephile--do you know if any of her work is available other than in such screenings (ie DVD)?

Also, Jonathan, I think you're probably onto something with your sense of television cable boosting the interest in documentary.
November 7, 2007 at 9:02 AM

Brian Doan said…
Dave-- She mentioned at our departmental dinner that she's doing a lot of one-on-one, handmade distribution (in other words, she makes copies for people herself), at least in the US, but she also said she's been setting up some distribution deals, so if I hear anything more, I will let you know.

Jonathan-- I think the TV thing is a good point, too-- and this film really plays with those expectations, in how it both conforms to and subverts its audience's familiarity with stuff like the discovery channel. There are parts that look like something you might see on that channel, but then the audio track sounds more like those out of the essay film tradition.
November 7, 2007 at 10:09 PM