Teenage Angst Has Paid Off Well... 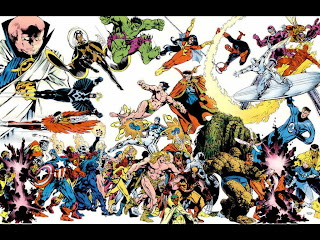 I imagine the sky is about to fall, or at least some pigs might fly through it, because I find myself nodding in agreement with David Bordwell. I have a lot of respect for Bordwell's vast knowledge of film history, his eye for detail, and the gracefulness of his detailed descriptions-- he's probably the most skilled formalist film studies will ever have-- but often find myself frustrated by his dismissal of more theoretically adventurous work and turned off by his scorched-earth critical voice.

This blog post, though (which I discovered through a link on Jim Emerson's site), is extremely enjoyable, and a fascinating glimpse into what makes the professor tick. While I wish he didn't feel the need to qualify his mystory-style musings with an apology like, "What follows may seem narcissistic nostalgia...," I am in full agreement with his take on "the adolescent window":

"Between the ages of 13 and 18, a window opens for each of us. The cultural pastimes that attract us then, the ones we find ourselves drawn to and even obsessive about, will always have a powerful hold. We may broaden our tastes as we grow out of those years—we should, anyhow—but the sports, hobbies, books, TV, movies, and music that we loved then we will always love.

The corollary is the Law of the Midlife/ Latelife Return:

As we age, and especially after we hit 40, we find it worthwhile to return to the adolescent window. Despite all the changes you’ve undergone, those things are usually as enjoyable as they were then. You may even see more in them than you realized was there. Just as important, you start to realize how the ways you passed your idle hours shaped your view of the world—the way you think and feel, important parts of your very identity."

Those are among the ideas that power this blog, which is why I'm fond of posts on Iron Man, 80s pop music and cheesy science fiction television shows, to name only a few totems of my youth. "In time you can turn these obsessions into careers," Elvis Costello once sang, and I always thought that was the best description of academia one could devise, or of any kind of writing. As Jeff is fond of blogging, we write our passions-- not just of them, but through them and within them (another pop reference that feels applicable, this one from The West Wing, when President Bartlet excoriates a Congressional candidate: "I don't like guys who get into politics because they think it's a good gig"). As Bordwell says later in the essay, "What’s kitsch or cheesy or retro to others is precious to you," followed by the most important line of the piece: "Make no apologies." This isn't just nostalgia-- although nostalgia's something of an underrated starting place, if you ask me-- nor just the "mummy complex" of plastic arts of which Bazin writes (the preservation of that-which-was, frozen in its prime), nor the reduction of pop love to sheer "use value" as teaching texts or article examples, although there's nothing wrong with such uses. Instead (for me, anyway), it's a weird, funny "I have to write this," a desire to explore and share, to write and reconfigure, to link up texts and ideas and periods and images as a kind of realization or revisioning of your view (still another pop reference, Jenny Calander on Buffy, typing at her computer late at night to reverse Angel's curse: "This is going to work, this is going to work!" It's like that, sometimes). A professor of mine called it the "snap," when various elements you're writing about link together in an "aha!" of revelation, but I might call it the "shiver," because it does become an almost physical manifestation of intellectual pleasure.

He might object to the reference, but to me, Bordwell's "Make no apologies" carries echoes of Roland Barthes' introduction to Pleasure of the Text: "The pleasure of the text: like Bacon's simulator, it can say: never apologize, never explain. It never denies anything: "I shall look away, that will henceforth be my sole negation." And the most useful (that ugly word again!) form of the adolescent window comes when we take up the mantle of Barthes' ideal reader: "someone...who abolishes within himself all barriers, all classes, all exclusions, not by syncretism but by simple discard of that old specter: logical contradiction; who mixes every language, even those said to be incompatible; who silently accepts every charge of illogicality, of incongruity..." For Barthes, this is the "reader at the moment he takes his pleasure," but it's also a superb definition of the blog, at least in its ideal form. It's writing, not as obligation or propriety, but as bliss.
Labels: childhood Comics Marvel memory movies Roland Barthes Theory

Greg said…
It's writing, not as obligation or propriety, but as bliss.