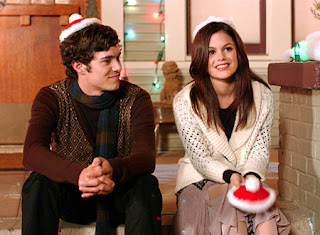 With a very busy fall and a fairly lame set of new programs, I'll admit that my television viewing has been sketchy lately. One show I have enjoyed is Chuck, the spy adventure/parody that airs Mondays on NBC. I'm a big fan of James Bond, The Avengers, I Spy, and other secret-agent-related pop ephemera, and I've enjoyed the ways Chuck has blended the conventions of the genre with an Apatow-style look at geek culture and corporate homogeneity. It has an appealing cast, too, including Zachary Levi, Yvonne Strzechowski, and the wonderfully deadpan Adam Baldwin. Mostly, though, it has Josh Schwartz, auteur behind TV's most pleasurable guilty pleasure, The OC (remind me to tell you sometime about what a delirious screwball delight that program's final season was). Chuck feels like the kind of show Seth Cohen might have written if he'd grown up and become a Hollywood screenwriter: it's funny, bright, sweet and plastic in all the best ways.

Still, even this show is one I miss from time to time, which is why I perked up at the ad for this week's episode, which announced a guest appearance from Rachel Bilson. Bilson played Summer Roberts on The OC, and was that fine cast's strongest asset: cute, funny, and smart, and able to balance snarky dizziness with surprising poignancy, particularly in the show's later seasons. She speaks like she has a gobstopper permanently stuck in her mouth: her cadences and inflections are always offbeat, and she always found ways to make even the most cliched dialogue pop by landing her emphasis on an unexpected word (she made the recurring "Co-HEN!" an expression of exasperation, confusion, love and jouissance, sometimes all at once). I'm kind of surprised she hasn't had a bigger career (although when your last big film was the Paul Haggis-scripted mess-- or is that redundant?--The Last Kiss, I guess you're a bit handicapped), but I'm delighted she'll be back on TV this week, and I think it's nice she and Schwartz haven't forgotten each other.

Monday at 8-- be there or be Marissa, daddio.
Labels: Chuck Josh Schwartz Media Rachel Bilson Spies The OC TV

We are researchers at the University of Texas and University at Buffalo working to better understand people's blogging behavior, and you are an ideal candidate to help. We would like very much to hear from you, and would greatly appreciate your time and willingness to respond.

Without your help, this kind of research would be impossible.

Please take a few minutes to read and answer the questionnaire on our research Web site: http://omega.uta.edu/~cyjang/blogsurvey/. It should take about 10 minutes of your time, and your answers will be very valuable.

Your identity will be protected because responses will be coded to provide anonymity; No personal names will be used. Of course, this is voluntary- by completing the survey you give your consent to participate. If you have any questions about the study or the questionnaire, please do not hesitate contacting us at your convenience. In the near future, we will be happy to share our results with you.

Anonymous said…
Did you see this episode of Chuck yet (I taped mine and just watched)? I thought it was great--probably my favorite episode to date. The truth serum plot device worked so well--it reminded me of something you might find on a good Whedon show, where the monster-of-the-week reveals character dynamics, themes, and important aspects related to the overall arc. I was also surprised, in the best possible way, by the last ten minutes of the show.

Brian Doan said…
Yes, I watched it Monday (somehow missed Bones last night, though-- maybe my memory can only remember one show a week). I liked it a lot-- I'm enjoying the love triangle that's developing, and really liked the platonic triangle between Chuck, the blonde (I am so bad with character names) and adam baldwin. The stuff with chuck's sister and her boyfriend was also funny, and it's also good to see they'll be keeping rachel bilson around awhile (I like the way her character is kind of summer five or ten years down the line, just as Chuck is an older riff on Seth Cohen-- it makes you feel like you've entered this whole universe Josh Schwartz has set up).
November 14, 2007 at 12:40 PM