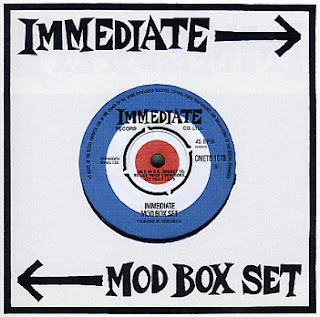 I'm about a disc or so into the fabulous 3-disc collection Immediate Mod Box Set, and I'd highly recommend it for anyone who loves that British version of 60s R&B/soul/pop that the mods fetishized. There's a wonderful kick to these tracks, which are steeped in guitars and horns and glissando, yet also radiate an otherworldliness that's appealing; it's neither Motown nor Stax nor the Beatles' versions of those styles, but an odd amalgamation of the three, filtered through a need to be a la mode that works very well. Mod is the sensibility between the gray flannel suit and that tired, smelly hippie aesthetic that ideology so often tells us must be the correct retrospective vision of the 1960s. It's rebellion through aesthetics, fashion-as-statement. What would a Mod criticism look like? Roland Barthes might be an obvious model, or perhaps Walter Benjamin on a scooter, secure in the knowledge that the hood on a parka is more eternal than an idea?
Labels: Fashion Pop Music Roland Barthes Walter Benjamin Writing

Greg said…
Three posts in one day? Brian, you're doing crystal meth aren't you. It's not worth it my friend. We all care about you and don't want to see you hurt yourself. Call me if you need anything.
November 16, 2007 at 5:39 PM