Backhanded Compliment Of The Day 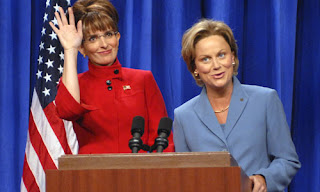 "Her relentless opacity was impressive."

I'm glad Biden did well, but boy am I glad I skipped that thing last night.

UPDATE (4:33pm): Not to sound all Glenn Greenwald, but does anything sum up the idiocy of Washington pundits better than this passage from Roger Simon's debate analysis? (h/t to Talking Points Memo for the link):

She went out of her way to talk in everyday terms, saying things like “I betcha” and “We have a heckuva opportunity to learn” and “Darn right we need tax relief.”

Biden was somber, serious and knowledgeable. And he seemed to think that debates are about facts. He had a ton of them.

Palin was a lot more direct in her attacks on Obama and a lot more simple. Criticizing Obama for saying he would meet with some foreign leaders who are hostile to the United States, Palin said: “Some of these dictators hate America and what we stand for. They cannot be met with. That is beyond bad judgment. That is dangerous.”

She also said: “An issue like that taken up by a presidential candidate goes beyond naiveté and goes beyond poor judgment.”

Sarah Palin accusing Barack Obama of being naive? Yep. And she was unabashed about it. And so what if Joe Biden has been in the Senate approximately forever and knows a lot more about a lot more stuff than she does? She doesn’t care.

“You recently said paying taxes is patriotic,” she said to Biden. “In middle-class America, where I have been all my life, that is not considered patriotic.”

True, a lot of her statements were of the fortune cookie variety. “At end of day,” she said, “if we are all working together for the greater good, it is going to be OK.”

But a lot of people like fortune cookies....
(clip)
Should all that down-home talk and body language really count? Joe Biden doesn’t think so.

Yeah? In politics? Since when?

"Facts are stupid things," Ronald Reagan famously intoned, and that seems to be the slant of a lot of post-debate Beltway spinning (which suggests they are already writing off McCain's next debate, and pinning all their hopes for a polling surge on propping up Palin's performance). This happens even though post-debate polling suggests that the broader public clearly saw Biden as last night's winner, leading to this wonderful graphic that Josh Marshall has up at TPM, showing the audience's snarking just at the moment when Simon was giving a version of the above to Chris Matthews: 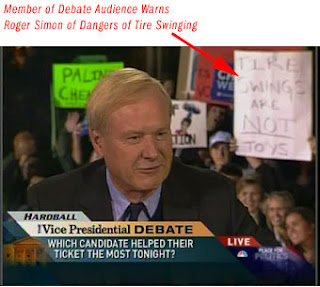