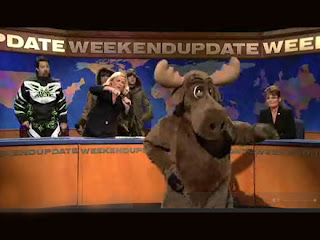 On April 17, 1976, in the run-up to that year's Presidential campaign, Ford administration press secretary Ron Nessen hosted Saturday Night Live. According to Doug Hill and Jeff Weingrad's definitive history of the show, Saturday Night, the Ford administration thought it would be smart politics to play along with Chevy Chase's withering satire of Ford as a bumbling idiot, in order to prove to swing voters that the President had a good sense of humor about himself.

In retrospect, Ford's administration was the last gasp of moderate Republicanism (and as a fellow Michigander, I've always had a soft spot for him). At the time, though, in the wake of Watergate and Ford's pardon of the odious Richard Nixon, the administration's lobbying to get a spot on the show caused some controversy among the show's liberal cast and writing staff. Eventually, it was arranged to have Nessen on the show, and it was this group's job to figure out how to do so while still not making it a 90-minute campaign ad for a President many of them didn't like.

The answer was to generally avoid direct comment on politics, but to turn every other potentially offensive hot button up to "11." After Ford himself said, via video, "Live from New York, it's Saturday Night!," the show showcased Ackroyd's disgusting "Bass-o-matic '76,"; played a sketch with advertisers imagining product names like "mangled baby ducks" and "painful rectal itch"; ran a film in which mock garbagemen talked about finding dead bodies in the trash; and hosted punk legend Patti Smith, whose scathing rock was clearly not a campaign jingle for Gerald. After displaying himself in the midst of this funny-yet-scatological hot house, Nessen found himself taken to task by Ford campaign operatives, who thought it didn't show their team in the best light.

I thought of that earlier moment watching the "Sarah Palin Rap" from this week's SNL. Again, a Republican finds herself running in the midst of what looks like a landslide year for Democrats, thanks to the corruption and ineptitude of the previous Republican president, and also finds her public image shaped more by a devastating SNL impersonation than by anything she herself says. Again, in order to counter the bad publicity, she chooses to go on the show to show how 'funny' she is, and again, finds herself swamped by the madness that the cast has framed around her.

Really, my one impression of Palin as Poehler rapped was not, "what a good sport!," but "does she even have any idea that they're mocking her?" It might not have been mangled baby ducks and dead people in the New York City garbage, but from the chants of "Obama-Ayers," to the finger guns and deadpan "bang bang" sound effects, to the dancing moose, it's a very sharp takedown of Palin's weird hockey mom/pit-bull public image; Palin's "what, me worry?" face doesn't so much signal self-deprecation as it does clueless self-aggrandizement. Along with her mean-spirited bigotry and utter corruption, a chief reason to vote against Palin is her completely deluded, God-chose-me-for-this-worldview, one that (like that of the current occupant), seems unwilling or unable to acknowledge that she might not be the Chosen One (and we all know there's only one Chosen One). Compared to Poehler's energy and go-for-broke determination, Palin came across as a zoned-out Marie Antoinette who seemed to think she was at another one of her foam-mouthed campaign rallies. Do you think she'll even register that it didn't work out two weeks from now, when Obama makes his victory speech?
Labels: Buffy Election '08 Media Palin Politics Random Oddness SNL TV