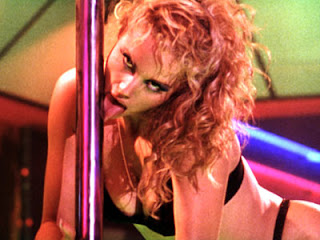 When I was in graduate school, we had something called "The Bad Movie Club." Participants would gather once a month to inflict the worst films they could find on each other, bringing the movie in a brown envelope, and not revealing the title until the "Play" button was pressed. Thus, did we see such classics as Uncle Sam, Swept Away (the Madonna version) and From Justin 2 Kelly.

In honor of that long-ago group, I'd like to begin a new recurring, weekly feature here at Bubblegum Aesthethics: The Evening Bad Movie Club, where I bring you trailers and clips from the strangest, most egregious films I can find. And since it's October, and since Jonathan and Bill are both doing horror blogathons this month, I thought I'd offer up this gem: Hell Comes To Frogtown.

pc said…
Hey, I liked this film...I've seen it at least three times....Rowdy Roddy Piper and Sex Obsessed FroG mutants...the legendary dance of the three snakes....what could be better!