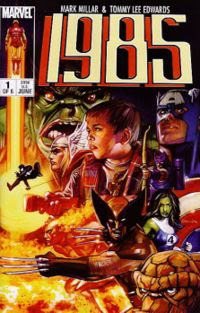 I was eleven the first time I'd ever heard of a "comics shop." As I wrote here a year ago, I'd read comics in a sort of piecemeal fashion through much of my childhood-- in the late '70s/early '80s days of spinner racks and grocery story magazine sections, one's selection of monthly titles came haphazardly, driven more by brand-name characters like Batman or Spider-Man, by the alluring cover imagery, and by the mysterious wonders of the "three-pack" (that cheap plastic bag of goodness that held three issues, only two of which could be seen, so you had to discreetly, er, bend the pack (out of range of the storekeeper's eye) to catch a glimpse of what was in the middle), than by any organized "collector" mentality.

Then a friend mentioned a place in Portage, MI, called Fanfare Comics and Games. I believe this store still exists-- I saw it the last time I was home, but it had moved into a strip mall, and seemed to cater more to card fans and gamers than comics readers-- but there's no way it could hold the same mystery and wonder for an eleven-year old today that it did for me 24 years ago. Like all good super-heroes, it hid its strength behind a nondescript secret identity, housing itself in a small, coverted house on a relatively unimpressive ground near the intersection (it might have even shared that space with a radio station, I know there was one next door, at least). But walk through the doors, and...

It was a small space, but that only added to its allure. Boxes upon boxes of back issues, Silver and Golden Age issues framed like fine art on the walls, and multiple racks of new comics on display on two different walls...It was a geek nirvana. Wait, you mean people collect these? They have a history? There are "direct issue" comics you can only get in this shop? There are magazines about comics? I already felt like Charlie in the chocolate factory, and sensing the long, vast history to these four-colored wonders also played on my deep fascination with history overall-- I could read about Stan Lee and Jack Kirby and Steve Ditko in the same way one read about Washington, or Jefferson (and c'mon-- for a nerdy eleven-year old boy, which set of historical figures was really more important?).

It was a good time to read mainstream comics-- John Byrne was writing and drawing the Fantastic Four, Roger Stern held court in the pages of the Avengers, Chris Claremont and John Romita, Jr. were enriching the mythology of the X-Men, Spidey had just gotten his symbiote suit, strange doings were occuring in the pages of Iron Man...I suppose there were things occurring in DC Comics, too, but aside from Marv Wolfman and George Perez's New Teen Titans, I didn't care too much about the Distinguished Competition (as Stan Lee mockingly referred to them on Marvel's "Bullpen Bulletins" page): a child of the 80s, I was very much a Marvel fan, as they seemed to have the best writers and artists, the most interesting characters, the most far-reaching sorts of mythologies, spaces that were both epic and deeply human, thus touching both the insecurity and grandiosity of their adolescent readers' imaginations. By the time 1985 rolled around, I was very much the four-colored addict, and the adventures of the Marvel Universe seemed vivid, real and essential.

When I read that Mark Millar and Tommy Lee Edwards were going to do a six-issue miniseries called 1985, it set off these associations for me, and I knew I had to read it. I had mixed feelings about Millar's work on Civil War (which always felt like an under-baked version of an interesting idea), but the notion of going back to a less convoluted time in Marvel's history, and linking the characters to the real world of the period, sounded like it might be an interesting exercise in nostalgia and fan critique.

They're five issues into their run, and it's an interesting, conflicted beast. One of Marvel's trump cards has always been that they are set in the "real world," having their characters roam around highly stylized versions of New York L.A., London, instead of "Gotham" or "Metropolis." 1985 takes that one step further by setting itself in the actual real world, one devoid of Marvel heroes and villains, but full of young and old readers that devour their comics. 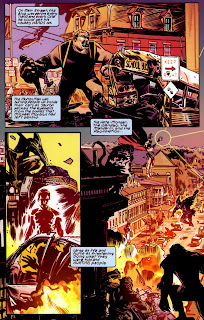 One of those readers is Toby, an angry and introverted thirteen-year old whose parents are divorced, and who shows little interest in much beyond the next issue of Secret Wars. One day, out for a walk with his father, they go to the old Wyncham home, where a childhood friend of Toby's father used to live. There are new residents moving in, and they offer father and son a trunk of vintage sixties Marvels (there's one wonderfully cartoonish reproduction of Avengers #1 that we catch a glimpse of in the corner of the panel).

Heroism is defined differently in a world without super-heroes, and here it's represented by Toby's father, a loser with a sense of ethics: he refuses the free gift (despite its artistic and monetary worth) and suggests they sell it to the local comics shop instead. That would be the end of the interaction, except that Toby thinks he sees a shadowy figure in the window that looks a little like Doctor Octopus...

Toby's concerns are dismissed, but he is (of course) correct: a rift in time and space has transported Doc Ock, Dr. Doom, and other Marvel villains into our world, where they are free to roam without the interference of Captain America or The Thing. The next three issues toggle between their increasing violence on this small town, Toby's Twilight Zone-like attempts to convince skeptics of what he's seen, and the everyday family problems Toby and his mother and father face. It's a lot to juggle-- and I haven't even mentioned the various comic book in-jokes-- and it often feels like Millar and Edwards have bitten off more than they can chew: especially in the "decompressed" landscape of contemporary comics, there's too little forward momentum in each issue, given how much ground they want to cover in six issues. By the time Toby finds the portal to the Marvel world inside the Wyncham house (a lovely metaphor for the kind of comics shop I mentioned above) and literally falls into the Marvel NYC, it begins to feel like we're getting the Cliffs Notes version of Millar and Edwards' tale, instead of the rich weave of the personal and the super-heroic that a twelve-issue run might allow for.

That said, there's a lot that's pleasurable here. The fetishist in me loves the glimpses of old Marvel comics that dot the pages, and the 80s cultural references and jokes that are often perfectly placed (a good Masters of the Universe joke, for instance). I like Millar's use of flashback, and the smaller moments of character development and observation he provides. Although it's a bit heavy-handed, the use of comics and comics characters as metaphors for Toby's emotional problems feels right: the super-heroic villains are larger than life and mysterious, just as they were to me when I was a young reader. Edwards' art is a great help in this: he tosses Doom, Modok and the others into shadowy spaces, and panel frames that often cut off parts of their faces or bodies, so we see only glimpses instead of the full-bodied shots we might get in a regular Marvel book. Edwards' inking style is dark, murky, almost chiaroscuro, and it's one of the few times the muted Marvel color palette works for the story: when Toby falls from our world into Marvel's, the colors go from drab (brown and blue and orange) to effervescent (yellow, red and white), a cartoonish space that evokes Dorothy stepping from Kansas into Oz (or a reader suddenly shoving her nose into a four-colored pamphlet). 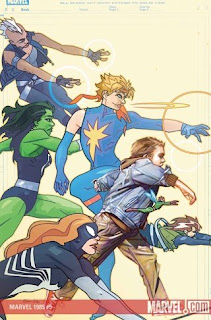 Do I wish it was longer? Do I wish he'd get to the point(s) a bit quicker? Do I think he could mine and mimic more of that Mighty Marvel '80s Style in his storytelling? Yes, yes, and yes. But I am glad 1985 exists, and I'm curious to see how it ends: in setting themselves the task of evoking the past in a contemporary frame, Millar and Edwards do a nice job of suggesting just how much has changed in the comics themselves, how much remains the same in our intense attachments to them, and how such attachments can be both problematic and the source of imaginative possibility.
Labels: childhood Comics General Geekery Marvel memory Superheroes

pc said…
Wow. I had forgotten about those horrible 3 packs. Always such a gamble. And, a big part of doing laundry on Sundays (the white hen next door to the laundry mat sold comics).

Not particularly relevant to your post, but a nice nostalgic moment.

Brian Doan said…
Hey Pat,
Glad you enjoyed the post, and I don't think it's irrelevant at all-- one of the cool things about the miniseries is how it sets off those nostalgic associations. My favorite three-packs as a kid were those with the STAR WARS adaptations in them.
October 24, 2008 at 7:26 PM