The Hum of Teenage Angst 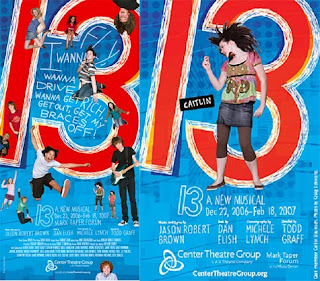 Jason Robert Brown is arguably the most interesting Broadway composer under 40 working today. His breakthrough show, Parade, musicalized the real-life tale of Leo Frank, a Jewish man falsely accused of murdering a young woman in 1913 Atlanta, and its haunting, dream-like structure and rich evocation of American folk music won Brown a Tony award in 1999. His follow-up, the off-Broadway cult success The Last Five Years, was to my mind even better. It took the standard boy-meets-girl romantic comedy structure and turned it inside out-- as the man and woman trade songs, you realize that they are moving in opposite directions through the narrative, as he looks ahead to what he knows will be a bright future, and she looks back from the perspective of a failed marriage (the gorgeous pop ballad "The Next Ten Minutes" is the one moment in the show where they occupy the same temporal space, and the ironies the narrative structure creates makes the already melancholy tune that much more heartbreaking, as the minor chords of the violins darken the brightness of the voices). The show would win Brown 2001 Drama Desk awards for music and lyrics.

With this interest in offbeat subject matter and innovative structures, the obvious comparison is with Stephen Sondheim (enhanced by the fact that longtime Sondheim collaborator Harold Prince directed the original production of Parade). Brown has cited him as a huge influence (and one of his early professional jobs was crafting the orchestration for a number at Sondheim's Carnegie Hall tribute in 1992). But he blends that with a strong interest in contemporary music, and the result is the kind of complex pop sheen that hasn't been heard on Broadway since Burt Bacharach wrote Promises, Promises: it's at once harmonically subtle and completely hummable, melodically rich and lyrically rueful.

Brown is back on Broadway this week with a new show, the junior high school musical 13. The show plays with both the title number-- there are 13 characters, all 13 years old-- and in its casting (it uses actual teenagers, and a teenage pit band). The Sondheim influence lurks here, too-- it sounds a lot like conceits behind Merrily We Roll Along, which also did the casting-teens-as-teens thing, but all signs point toward a happier ending than that which Sondheim's musically brilliant flop faced (13 already garnered strong reviews in its initial L.A. production). The score has just been released to I-tunes, and it's fun-- given its narrower subject range, it isn't as musically adventurous as Brown's other work, but its pop-rock rhythms are infectious, and its self-aware pastiches of genres are a delight (Brown's lyrics are as sharp as ever-- his eye somehow balances between witty critical distance on adolescent travails and almost painful sympathy with teen lust's up-and-downs).

There's a good interview with Brown in today's New York Times. He comes off as both ambitious and remarkably insecure (keeping in mind that the Times is often condescending to anyone with a pop bent, or an interest in blending the disparate genres that their live arts coverage is so intent on keeping stratified), but that makes a certain amount of sense: his songs often explore such emotional mixtures, and the fault lines in-between, where seeming paradoxes suddenly seem utterly clear.
Labels: Burt Bacharach Jason Robert Brown Media Musicals Pop Music Stephen Sondheim Theater