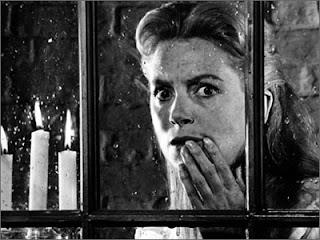 --Blog pals Jonathan and Bill are devoting October to horror blogging. This is not one of my favorite genres, but when Bill tackles horror literature like Turn of the Screw, and Jonathan draws deep into his well of screen grabs, video clips and scanned images, the results are shivering good fun. Head over to their blogs and get bloody, baby.

--Wasn't it just yesterday that the McCain campaign was airing an ad about Barack Obama's supposed 'sexism,' with a condescending female voice saying of his supposed treatment of Sarah Palin, "How disrespectful!"? Now that they are down by nine in the latest polls, it seems the ever-flailing McCain groupies are tossing their chivalry aside and going after Gwen Ifilll. Steve Benen has the ugly details of Day Two of Ifill-palooza, but it's notable to me that they're not even trying to hide the racism anymore. How disrespectful.

I myself already have Palin burnout, and with B&W DVD delights like Pandora's Box and This Above All arriving from Netflix today, I will be skipping the madness and luxuriating in my cinephilia. Please feel free to post your thoughts about the debates in the comments section, though.

-- Speaking of debating, Roger Ebert smacks John McCain for bad manners here. This follows up on last month's exquisite smack of Jay Mariotti, so it's been a good period for Mr. Ebert's always-valuable critical voice.

--Covering the election is one thing, but the blogger known as Wanders has set himself a more difficult task: blogging about Mary Worth. It's a thankless task, but Wanders handles the adventures of America's favorite meddler with aplomb at Mary Worth & Me. Head over and read his witty takes on the day's events.

--When I heard Paul Newman died, one of the first places I went was to Self-Styled Siren's blog. As morbid as it might sound, I knew that Campaspe would have something smart, moving and gorgeously phrased to say about this sad event. And I was right.

--Baseball playoffs are here (go Cubs!), and Fire Joe Morgan is on the case, already finding early evidence of media coverage idiocy. Head on over for a few laughs in this season of "gritty little guy" hagiography.

Greg said…
Thanks for the kudos Brian. Go Cubs! If the Sox and the Cubs played each other I'd root for the Cubs. Hey, the Sox have their modern day victories now and I'm not heartless. I mean 1908, that's a long damn time. And how fitting to win again a century later.
October 2, 2008 at 9:55 PM

Brian Doan said…
My pleasure, Baron von Lapper. I was wondering how closely you were following baseball, since you said you were burned out on football. I actually thought the Angels were going to pull out the win last night until Vlad's ill-advised attempt to run for third. I suspect that will be a short series. Thanks for the Cubs support-- the Tigers are really the baseball team I cheer for, but the Cubs are my NL team, and I used to live down the street from Wrigley, so I'd like to see them do well.