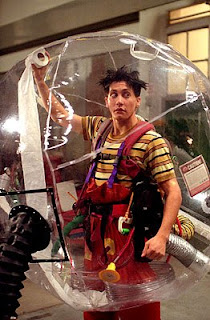 All six of my longtime readers know that I admire Frank Rich a lot. His theater criticism was wonderful; his memoir Ghost Light is a deeply moving study of adolescent insecurity set against a crumbling family life and a geeky love of the theater; and when he came to Oberlin last month and interviewed Stephen Sondheim, he was a witty and sympathetic interlocutor.

Normally, his Sunday columns are a cornucopia of sharp-edged pithiness, but he swings and whiffs with today's piece, which tries all too hard to paint Sarah Palin as the future of the Republican Party. I don't doubt that Rich is well-intentioned in his Cassandra wail, nor do I doubt the accuracy of the picture he paints of the hard right gathering behind their heroine. Does she want to be President? Probably, or why else would she have leaped at the offer of a VP slot for which she's absurdly unqualified? Will she be President? Not a chance.

Rich gives her too much credit in this piece, reading her as the avant-garde of the GOP, but that's a position that's tenable only if you are trapped in a Beltway mentality; Rich grew up in DC and wisely fled for New York as he got older, but his column today represents the viewpoint of a Washington Bubble Boy, trapped within the mechanics of conventional wisdom that The New York Times propogates, and that only the most tenacious and talented scribes can escape (Paul Krugman is the op-ed page's sole Houdini). Certainly, Buchanan and Co. were spinning wildly yesterday, trying to pump up the barracuda myth-- but was anyone listening outside the studio?

Outside of the bubble, voters overwhelmingly gave Biden the win. Palin scored points with her folksiness, but drew mixed reviews for her literally wink-wink persona (devastatingly parodied again by Tina Fey on tonight's SNL, where, just as with last week's parody of the Couric interview, they barely had to tweak her answers to create the dialogue and get laughs). Just before the debate, McCain pulled his troops out of the bellweather state of Michigan, and unlike his fake suspension, this move seems like the real deal. He's fallen behind in several normally red (or at least purple) states like Florida and Virginia, and has even seen North Carolina's poll numbers oscillate wildly. With his numbers in free-fall across the country, one might ask-- what good has Sarah Palin done him, exactly?

As Troopergate becomes an even bigger problem for Palin, as her tax records show discrepencies, and as her actual words (and not just the "starbursts" she lands on Rich Lowry's crotch) get analyzed, it shouldn't be surprising if her favorability numbers return to their pre-debate, -10 levels. Perhaps sensing this, Palin herself went on the attack the other day, throwing overboard her debate persona of supposed "kindness" and falsely re-spreading the disproven rumor that Obama "pals around" with terrorists. This will all appeal to the base, and maybe that's all she needs to be seen as the future of the party, but that's considerably different from being President, for which she'll need the very swing voters that she's been alienating for the last three weeks.

In spreading scandal, Palin not alone-- Frank Rich's own paper trumpeted a silly story on their front page Saturday re-opening stories about Obama's connections to William Ayers. As Steve Benen points out here, much ink is expended, but the conclusion is the one everyone already knew-- there's not really a story here. That didn't stop them from putting it on the front page, though-- between the front-page narratives of Adam Nagourney and Elizabeth Bullimer and the back page musings of Dowd and Rich, it seems safe to say that the Beltway bubble is still trying to make it a horserace, even as Obama pulls ten points into the lead, and breaks the 50% mark in recent polling. Crafting such narratives is, after all, what self-proclaimed Mavericks do. For the rest of us, it seems more and more likely that this will be the future (h/t to Oliver Willis for the link):